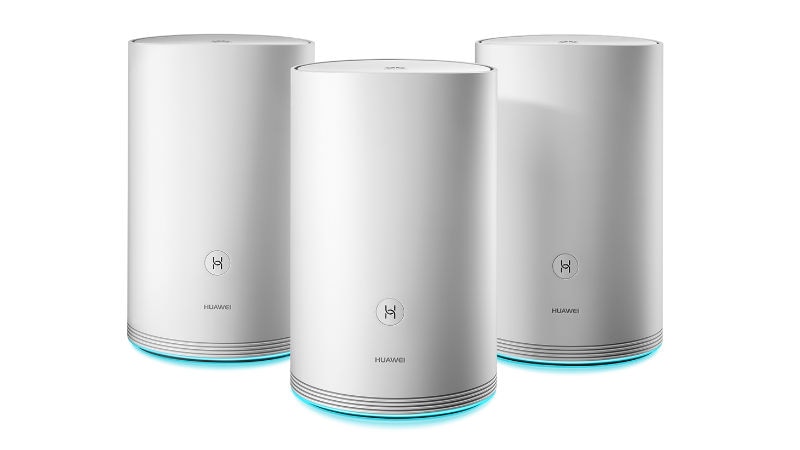 Huawei at the ongoing CES 2018 brought a hybrid whole home Wi-Fi system that is touted to deliver "blazing fast" wireless connectivity. Called the Huawei WiFi Q2, the new system lets users pair a base station with up to 16 satellites to widen the coverage of a Wi-Fi network in a home environment. The system also has a capable hardware to deliver a hybrid connection of as high as 1867Mbps by bonding the speed of PLC (Power Line Communication) and mesh Wi-Fi. It would ultimately give a tough competition to some smart Wi-Fi routers designed by Google, Linksys, and Netgear among others.

Routers with support for a mesh Wi-Fi network are quite common nowadays. But the tradition solutions often depend on the shape and size of the home and come with a complex installation and configuration processes. Huawei appears to have addressed all such issues with the WiFi Q2. This system includes a distinct G.hn gigabit PLC module that enables network access transverse walls. Further, the main unit of the system has a five-step installation process, while the sub units come with simple, plug-and-play functionality.

Huawei claims that the WiFi Q2 can easily support up to 192 connected devices simultaneously with the complete system - comprises a base station and 16 satellites. The system with default 5GHz frequency band also supports up to 16 hotspots and let users add additional satellites without any manual configurations. All this is sufficient if you're looking a single solution for your smart home or planning to transform your home into a smart one where some Wi-Fi-enabled lights, sockets, and tons of other devices would be present.

The single Wi-Fi connectivity nature of the Huawei WiFi Q2 enables the system to offer 100ms switching time on 802.11v protocol. Plus, there is an anti-brute force algorithm that helps to prevent any outside or unwanted access to the network.

Huawei hasn't revealed any details about the availability of the WiFi Q2. However, considering its compelling features, the system is expected to soon hit the global markets to give no space to competitors for similar developments. CNet reports that the Huawei WiFi Q2 with three bases is priced at $349.99 (approximately Rs. 22,300), while a set of its one base and two satellites will go on sale at $219.99 (roughly Rs. 14,000).