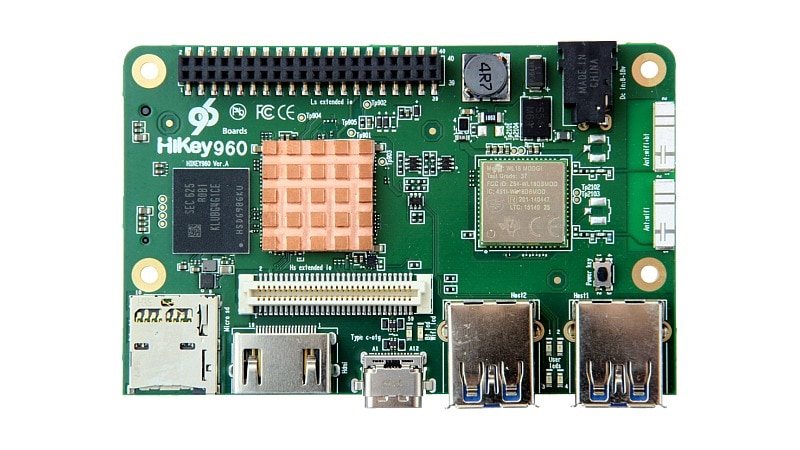 Huawei, Google, ARM, among others, have collaborated to launch a new single-board development computer similar to the Raspberry Pi, except it's a super-powered alternative that is priced at $239 (roughly Rs.) – to put that in perspective, the Raspberry Pi 3 costs $35. Called the HiKey 960, it's a 96Boards development platform that will go on sale in the US, EU, and Japan in early May.

Also on board the HiKey 960 are LEDs for Wi-Fi & Bluetooth, four user LEDs, and a power button. It measures in at 85x55mm.

The HiKey 960 board was launched by Huawei, a core member of Linaro - an open source collaborative engineering organisation developing software for the ARM ecosystem - and its 96Boards initiative. Other members that contributed to the development of the platform are ARM, Google, Archermind, and LeMaker.

The HiKey 960 is officially supported as an Android reference board. Linaro in a statement said, "Initial software support for the board is provided in the AOSP source tree based on the Android Common Kernel using the Linux 4.4 kernel release. Linaro and Huawei are also working on the Linux 4.9 based Android Common kernel." PC World notes you can load up to Android 7.1 Nougat on board currently, and points to Google's instructions on how to do it.

The statement added that while all AOSP developers will find the board useful, hardware-focused developers will find it more beneficial, with avenues like mobiles, digital signage, point of sale, robotics, and others. Notably, Google this week also announced the release of the Google Assistant SDK, which will allow developers to build the voice assistant service into their products. The Google Assistant SDK was claimed by the search giant to be "ideal for prototyping on Raspberry Pi devices", giving us a Google Home style use-case for the HiKey 960.