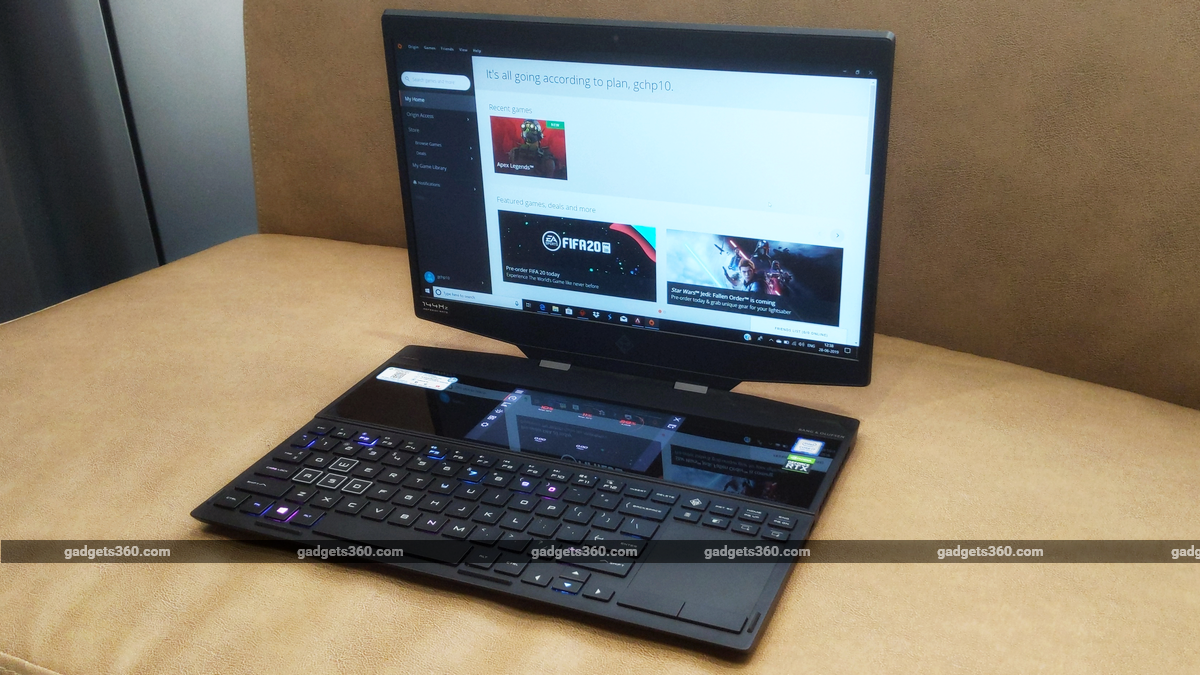 HP Omen X 2S has a secondary screen on top of the keyboard.

HP has expanded its portfolio and introduced the Omen X 2S dual-screen laptop in India. Alongside, the company has also made available the Omen 15 and the Pavilion Gaming 12 laptops in the country as well. The HP Omen X 2S laptop debuted last month in the US. To stand out in the ever-growing market of gaming laptops, HP touts that the Omen X 2S sports the "world's first dual-screen design". Key highlights include a 15-inch display panel that has a 144Hz refresh rate, and a 6-inch 1080p touchscreen panel that is mounted on the top of the keyboard. Alongside, HP has also made available the Photon Wireless Mouse, the Outpost Mousepad with wireless charging capabilities, gaming headsets, and a gaming mouse in India.

HP Omen X 2S laptop is priced in India starting at Rs. 2,09,990. It will be made available from July 1 via HP.com and other retailers. The HP Omen X 2S simultaneously operates both display panels to enable mirroring and multi-window experiences. The secondary display panel that sits just above the keyboard allows gamers to use other apps, such as Twitch and Spotify, without interrupting their ongoing gameplay.

As mentioned, the laptop has a 15.6-inch primary display that comes in 1080p resolution with 144Hz refresh rate. There's also a 6-inch 1080p secondary display can also be used to mirror the screen in a real time to let you easily magnify the on-screen content on the second screen. Under the hood, the new HP machine has up to ninth-generation Intel Core i9 CPU, paired with Nvidia GeForce RTX 2080 Max-Q graphics card and up to 16GB of DDR4 RAM. There is also an option to switch to Intel Optane storage.

Similar to other gaming notebooks, the HP Omen X 2S backlit keyboard that has RGB lighting. There are also options to customise RGB lights on both the keyboard and the Omen logo. The Omen X 2S comes in a 20mm-thick chassis that is made of metal. There a proprietary thermal management technology that works using three-sided vents and supports five-way airflow. There is also a special liquid metal CPU thermal paste that is claimed to offer a thermal conductivity 10 times higher than ordinary silicone grease. Furthermore, there is a 12V fan with a three-phase liquid bearing motor to reduce the heat.

HP also refreshed the Omen 15 laptop alongside the new Omen X 2S, and this variant is now priced starting at Rs. 1,24,990. This variant is already available to buy via HP.com. The new Omen 15 has 144Hz display panel with 1080p resolution, ninth-generation Intel Core i9 CPU along with up to 16GB of RAM and Nvidia GeForce RTX Max-Q7 2080 graphics. Both the Omen laptops also support new Intel Wi-Fi 6 (802.11ax) that offers up to 3X faster file transfer speeds than Wi-Fi 5(802.11ac).

HP Pavilion Gaming 15
The Pavilion Gaming 15 laptop has been refreshed, and it is now priced in India at Rs. 70,990. This new model is thinner and arrives with an eight percent decrease in height over the previous model. New specifications come with options like up to the latest 9th Gen Intel Core i5/i7 high performance mobile CPUs and up to the recently announced NVIDIA GeForce GTX 1660 Ti with Max-Q design.

HP Omen Photon Wireless Mouse
The HP Omen Photon Wireless Mouse was also launched in India with price tag of Rs. 8,499. It will be available via HP.com from July 1. The wireless mouse comes with removable rests, 11 customisation buttons, and features a 2.4 GHz Proactive Wireless Technology. The mouse touts to have a click response time of 0.2ms, the ability to charge on any Qi enabled surface, and claims to offer up to 50 hours of battery life.

HP Omen Outpost Mousepad, other accessories
There's also the HP Omen Outpost Mousepad that is launched with a price tag of Rs. 7,999. It will be available from July 1 as well from HP.com. It supports Qi wireless charging capabilities and can fully charge the Omen Photon Mouse in 2.5 hours and works with compatible smartphones as well. It comes with hard and soft anti-fray mat options on each side, and supports a USB Type-A Passthrough port for a wireless dongle.