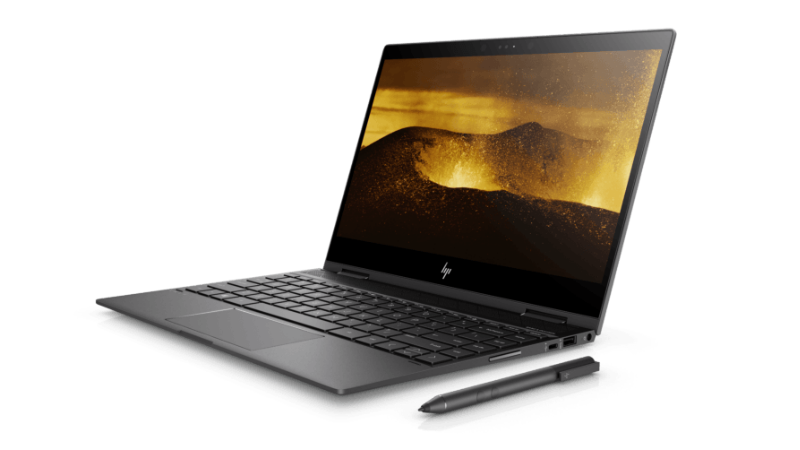 HP on Tuesday launched the new Envy x360 premium convertible notebook in India that is powered by AMD's Ryzen processor. The new model, which comes as the successor to the Envy x360 that was showcased at the 14th Cannes Film Festival back in May last year, features an angular Damascus pattern, a display with thin bezels, and an edge-to-edge backlit keyboard. HP has also offered a bundled HP Active Pen that works with Windows Ink. Alongside the Envy x360, the company has brought its other new devices, including the HP Pavilion Tower 590 desktop, HP Pavilion 15 ultra-thin 15-inch laptop, and the HP 15 Notebook. The company has also launched the HP Envy Urban Sleeve, Envy Urban Backpack, Envy Urban Top-load, and Envy Urban Tote.

Pre-bookings for the HP Envy x360 have already been started in India through HP's official online store. Notably, customers pre-booking the notebook before October 25 will also get an HP Envy Top-load bag worth Rs. 3,999 at no additional cost.

Featuring a Dark Ash Silver finish along with the Damascus pattern, the new HP Envy x360 was unveiled in May as a premium convertible by the company. There are options to pick either AMD Ryzen 3 or Ryzen 5 along with up to 8GB of DDR4 SDRAM and 256GB PCIe NVMe M.2 SSD. Further, there are choices between AMD Radeon Vega 6 and Radeon Vega 8 graphics. HP claims that the presence of AMD Ryzen processor helps the Envy x360 deliver up to 12.5 hours of battery life on a single charge. There is also the HP Fast Charge technology that is claimed to provide zero percent to 50 percent of battery life on 45 minutes of charge. Moreover, there is the company's CoolSense technology for thermal management and the all-new HP Command Center to optimise system performance.

The full-HD micro-edge display of the new HP Envy x360 is protected by a Corning Gorilla Glass NBT panel. Also, the notebook has Bang & Olufsen speakers along with HP Audio Boost technology to enhance your on-the-go entertainment experience. There is an edge-to-edge backlit keyboard for typing, though the Envy x360 also has touchscreen support that powers four productive modes. The notebook runs Windows 10 out-of-the-box and weighs starting at 1.3 kilograms.

Aside from the new Envy x360, HP has the sleek-looking, Pavilion Tower 590 desktop that is powered by a quad-core AMD Ryzen 5 processor along with AMD Radeon RX 550 graphics. There is also the HP Pavilion 15 as the ultra-thin 15-inch laptop with narrow bezel and a metal body with an hourglass design. It comes as the company's thinnest and the most powerful Pavilion-series model. There are enhanced lift hinge to improve thermals and ease your typing. Furthermore, the new lineup has the HP 15 Notebook that is touted to deliver 13 hours of battery life on a single charge and supports fast charging technology to enable 50 percent of battery in 45 minutes of charge. The new notebook model has a metal-finished design and a silver keyboard deck along with palm rest.