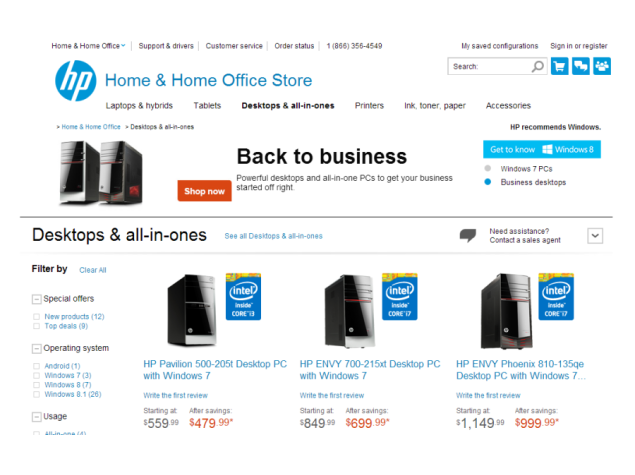 HP has launched a new line of PCs and laptops in the US with Windows 7 installed by default. The move is part of an advertising promotion that places the Windows 7 devices front and center on HP's website under the heading "Back by popular demand!". HP's promotion will come as a setback to Microsoft, which is trying to recover from perception problems relating to Windows 8's new user interface, which has made buyers wary of upgrading to it.

Sales of desktop and notebook PCs have been slumping for years, with a recent Gartner report estimating that worldwide shipments had declined by 10 percent in 2013. Recent industry-wide pushes including the adoption of slim, touch-enabled form factors and touch-friendly interfaces such as Windows 8 have failed to reinvigorate the market in the face of rapidly increasing tablet and smartphone adoption.

HP's new lineup consists of only three desktop PCs and two laptops for home and home office users, most of which fall within the budget segment. The company continues to offer a total of 37 desktops and 43 laptops and hybrids, including one Android-based model in each category.

Users have not responded positively to Windows 8's dramatic redesign of the user interface, forcing Microsoft to backtrack somewhat when it released Windows 8.1 last year. Despite lengthy publicity campaigns to educate users and prepare them for the change, the OS was confusing because people had to constantly switch between the new default "Modern" environment with only full-screen apps, and the traditional desktop where most commonly used programs still run. Angry users immediately began a campaign to restore the Start menu, while businesses simply declined to upgrade.

Most manufacturers have continued to offer Windows 7 alongside Windows 8, especially to business consumers, but this is the first example of a concerted push to take advantage of users' reluctance to let Windows 7 go in the consumer market.
Comments