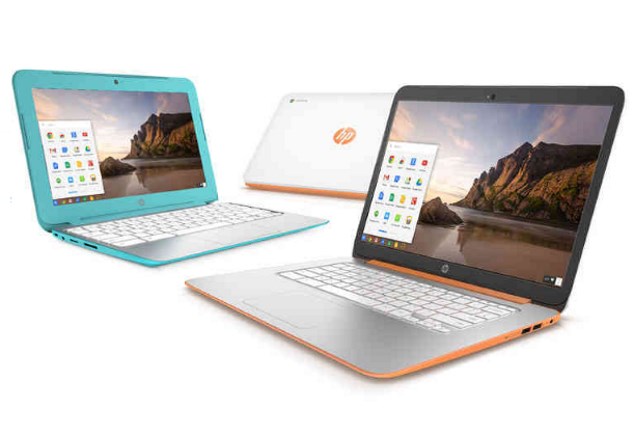 The new 11-inch HP Chromebook and 14-inch HP Chromebook are both thin and light. The 14-inch model is based on an Nvidia Tegra K1 processor and boasts "world-class graphics performrance" while the 11.6-inch model is based on an Intel Celeron N2830. Both models' screens have a resolution of 1366x768 and both promise 8 hours, 15 minutes of battery life. Both also offer Wi-Fi b/g/n/ac and optional mobile LTE/HSPA modules.

Multitouch trackpad gestures are supported, along with HDMI, USB 3.0 and USB 2.0 ports. The two models also have front-facing webcams and microphones. The 11-inch model will go on sale starting at $199.99 (approximately Rs. 12,090) in either turquoise or white, while the 14-inch model will cost $299.99 onwards (approximately Rs. 18,130) and come in turquoise, neon green. orange or silver.

The new HP Envy x2 devices are available in 13.3-inch and 15.6-inch models. Both are powered by the new Intel Core M processor and promise great performance as well as long battery life. The new design features a fabric-covered backlit Bluetooth keyboard which doubles as a cover. The 13-inch model comes with up to 256GB of solid-state storage while the 15-inch model optionally comes with a 500GB hybrid hard drive.

The HP Pavilion x2 is a full-featured 10-inch Windows tablet with a detachable keyboard cover that can transform into a laptop. It is powered by an Intel Atom processor and promises up to 11.75 hours of battery life.

The devices are expected to hit markets in the US in time for the holiday shopping season.