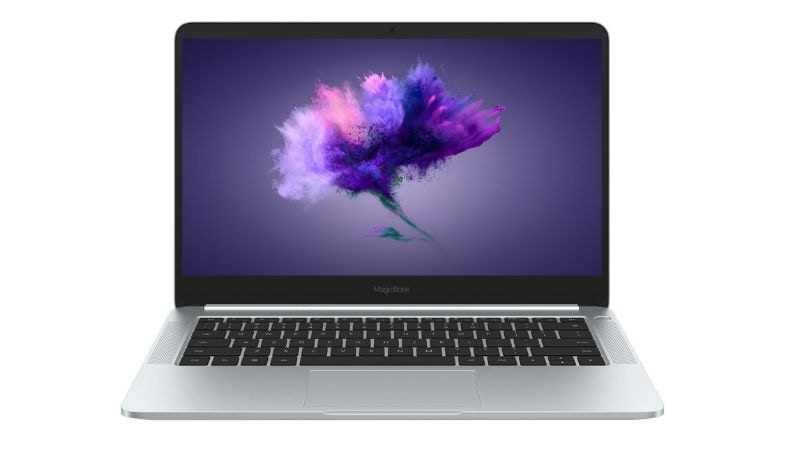 Along with the Honor 10 smartphone, the Huawei sub-brand has launched a notebook called Honor MagicBook in China. The MagicBook, which appears to have taken design cues from the Apple MacBook series, is a light-weight laptop. It will be available in three colour variants - Glacier Silver, Star Grey, and Nebula Violet - in China. Pre-orders for the MagicBook started on Thursday via VMall, and the notebook will go on sale from April 23.

The Honor MagicBook sports a 14-inch full-HD (1920x1080 pixels) display with 5.2mm narrow bezels and a screen-to-body ratio of 81 percent. The display has 45 percent coverage of the NTSC colour space and provides 800:1 contrast and 250 nits of brightness. The notebook is powered by 8th generation Intel Core i5 (i5-8250u) or i7 (i7-8550u) processor paired with 8GB RAM and 256GB SSD. The notebook also features a 2GB Nvidia GeForce GeForce MX150 graphics.

Both the CPU and the GPU in the Honor MagicBook, have a single fan via heat pipes. It takes in cool air from three vents and blows out the hot air. Under the hood, is a big 57.4Wh battery, which provides roughly around 12 hours of use. The battery can be charged via USB Type-C cable, and the company promises a charging capacity of 0 percent to 70 percent within an hour.

The body of the Honor MagicBook is made of aluminium, measures 323x221x15.8mm and weighs 1.47 kg. Apart from the USB Type-C port, the Honor MagicBook comes with USB Type-A 3.0 and a USB Type-A 2.0, an HDMI port, and a 3.5mm headphone jack. Also, with the Magic-Link app, buyers can transfer files between a Huawei smartphone and the laptop. The Honor MagicBook packs 4 speakers with Dolby Atmos and dual mics. It has a fingerprint sensor on the side as well.

In terms of pricing, the MagicBook with Core i7 processor will cost at CNY 5,699 (roughly Rs. 60,000) and the Core i5 model has been priced at CNY 4,999 (roughly Rs. 52,600). Notably, the company has not revealed any information regarding the release and price for global markets.

Donald Trump-Nominated Jim Bridenstine Confirmed as New NASA Chief
As Doors Close in the US, Huawei Sets Its Sights on Europe