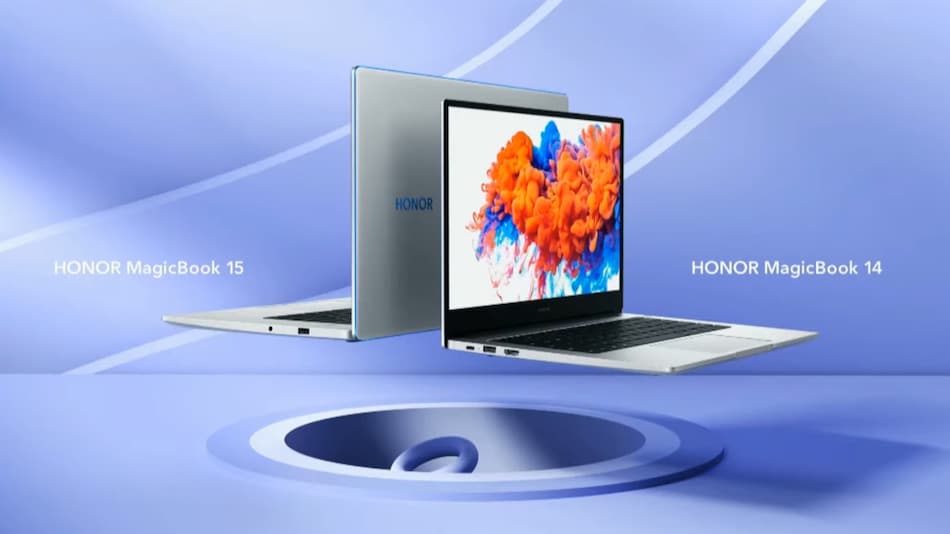 Honor MagicBook 14 and MagicBook 15 both have FullView Display panels

Huawei brand Honor has announced the global debut of the MagicBook 14 and MagicBook 15. Both new Honor laptops come with an aluminium body and include features such as 65W fast charging and FullView display to compete against various Windows-based ultrabooks available in the market. To emphasise on user privacy and security, the Honor MagicBook 14 and MagicBook 15 also feature a pop-up webcam on the keyboard and a fingerprint sensor-equipped power button. Honor had originally planned to launch its MagicBook-series laptops at Mobile World Congress (MWC), but since the trade show was cancelled due to the Novel Coronavirus outbreak, the company hosted the launch through an online stream.

The Honor MagicBook 14 and MagicBook 15 will be available for purchase with a starting price of EUR 599 (roughly Rs. 47,000) for the configuration of 8GB of RAM and 256GB of SSD. The laptops will go on sale in Europe, UK, Germany, France, and the Czech Republic among other markets by the end of March and will come in Space Grey as well as Mystic Silver colour options. Details around the India pricing and availability of the latest MagicBook models are yet to be announced. However, Honor India President Charles Peng last month told Gadgets 360 that the new laptops would launch in India at the end of the first quarter or by beginning of Q2 this year.

Honor entered the markets of notebooks with the launch of its first-generation MagicBook that debuted in China in April 2018 with a design similar to Apple MacBook models. The brand also brought the MagicBook Pro with 14-hour battery life in July last year.

The Honor MagicBook 14 features a 14-inch FullView display with 4.8mm ultra-thin bezels and 84 percent screen-to-body ratio. The laptop is powered by an AMD Ryzen 5 3500U CPU, paired with Radeon Vega 8 GPU and 8GB of DDR4 dual-channel RAM. There is also a 256GB PCIe SSD onboard. The Chinese brand has provided a unique fan design on the MagicBook 14 with S-shaped blades. It is touted to improve heat dissipation and airflow by 38 percent.

Design-wise, the Honor MagicBook 14 is touted to be 30 percent thinner than typical magazines with 15.9mm of thickness. The laptop also sports blue chamfered edges that are developed through a diamond cut. Further, there is the off centre Honor logo to match the aesthetics.

The Honor MagicBook 14 packs a 56Whr lithium-ion battery that is rated to deliver up to 10 hours of battery life on a single charge. The notebook also includes a USB Type-C charging port that supports 65W fast charging. The brand claims that it charges up to 46 percent in the first 30 minutes when using the bundled USB Type-C charger.

One of the USPs of the MagicBook 14 is its pop-up webcam that is discreetly hidden under the camera button available on the keyboard. The notebook also has the power button embedded with a fingerprint sensor.

The Honor MagicBook 15 also has a similar design and hardware that we have on the MagicBook 14. However, what's majorly different is the 15.6-inch FullView Display panel over the 14-inch display available on the smaller model. This brings a screen-to-body ratio of 87 percent. The notebook is claimed to get charged 53 percent in just half an hour -- using the USB Type-C 65W charger. It comes with the AMD Ryzen 5 3500U CPU, paired with Radeon Vega 8 GPU and 8GB of DDR4 dual-channel RAM and 256GB of PCIe SSD.

Honor has provided the same keyboard structure with the pop-up webcam on the MagicBook 15 that we have on its sibling. Similarly, there is the S-shaped fan design for heat dissipation.

Oppo Find X2 to Officially Launch on March 6: All You Need to Know
iQoo 3 Price in India Starts at Rs. 36,990, First Sale on March 4: Event Highlights