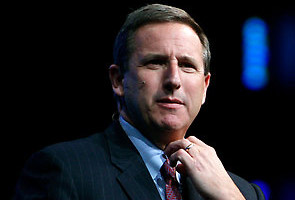 Highlights
Mark V Hurd, who turned Hewlett-Packard into the world's largest technology company on the back of fierce fiscal discipline, has been ousted from his post for the lowliest of corporate offenses -- fudging his expenses.

HP's board stunned Silicon Valley and Wall Street late Friday by announcing Mr Hurd's resignation as chairman and chief executive of the computing and printing giant, involving what it said was a "close personal relationship" with a contractor who helped with the company's marketing.

The woman's lawyer contacted the company in late June, charging sexual harassment. While the directors were investigating that charge, they found inaccurate expense reports that covered payments made to the woman. The directors said, however, that the sexual harassment charge was unsubstantiated.

The board charged that Mr Hurd, 53, failed to disclose his use of company funds. It urged Mr Hurd to resign, but he balked and offered to compensate the company for the disputed funds, said to range from $1,000 to $20,000, according to a person close to Mr Hurd who was briefed on the situation but was not authorized to speak publicly.

The board, however, insisted. "This was a necessary decision," said Marc L Andreessen, a venture capitalist and a director.

Mr Hurd's actions "showed a profound lack of judgment," said Michael Holston, executive vice president and general counsel whom Mr Hurd had brought into the company in 2006 after he investigated a boardroom scandal involving company spying on board members, employees and journalists. That investigation ended with the resignation of the company's chairman and the elevation of Mr Hurd.

Gloria Allred, the celebrity lawyer who has agreed to represent the woman, said, "We want to make clear that there was no affair and no intimate sexual relationship between our client and Mr Hurd." She declined to make the woman available for an interview or to identify her.

The company's stock plummeted almost 10 percent on Friday on the news of Mr Hurd, known for his straight-talking, analytical approach to business. Mr Hurd rewired HP through layoffs, acquisitions and relentless cost-cutting measures.

The woman worked for HP between the fall of 2007 and the fall of 2009, having been hired by the office of the chief executive, the company said. Sources close to the company and familiar with the situation said that over a number of months, the contractor attended events for HP in Asia, Europe and the United States, and often dined alone with Mr Hurd after the events. The contractor's fees ranged from $1,000 to $5,000 for events in the United States and up to $10,000 for overseas ventures.

Even though the same contractor was present, Mr Hurd said that he dined alone or with a different person on his expense reports, these people said.

A person briefed on this situation said Mr Hurd had described the situation as "surreal and bizarre." Mr Hurd has denied any romantic context in the relationship with the contractor and talked about the board being swayed by the potential public relations problems that would follow accusations of sexual harassment.

Mr Hurd, who was in the midst of contract negotiations with the board, did not file his own expenses, this person said. H.P.'s board and Mr. Hurd had, over the past month, been negotiating a new contract that would have had him earning $100 million over the next three years, according to a person briefed on the meetings.

The news of his resignation stunned many in Silicon Valley. "I am shocked and surprised," said Jonathan I Schwartz, the former chief executive of Sun Microsystems, a longtime rival to HP "That is not the Mark Hurd I worked with."

Mr Hurd took over a bumbling HP in early 2005 and turned it into one of the most consistent performers in the technology industry. In that time, the price of the company's stock doubled. Under Mr Hurd, HP surged past IBM as the largest technology power with its sales increasing to $115 billion a year, from $80 billion.

Besides rewiring HP through layoffs and cost-cutting, Mr Hurd also made several major acquisitions to strengthen the company, including Electronic Data Systems and Palm. "He is an outstanding executive and in all of my dealings was always very open, honest and effective," Mr Schwartz said. "From my vantage point, Mark established and maintained a position that is the envy of the industry."

"I think to some extent it will be business as usual within the various units," said Shannon Cross, the managing director of Cross Research, an equities research firm. "Clearly, they have effectively C.E.O.-level people running the businesses."

"This is not an HP issue," Ms. Cross said. "It is a Mark Hurd bad personal judgment issue."

Mr Hurd is leaving with $12,224,693 in severance, according to a company filing with the Securities and Exchange Commission on Friday. HP also extended the deadline for Mr Hurd to purchase up to 775,000 shares of HP common stock, which were vested as of Friday, and 330,117 performance-based stock units that will also vest.

Mr Hurd, in a statement, said: "This is a painful decision for me to make after five years at HP, but I believe it would be difficult for me to continue as an effective leader at HP and I believe this is the only decision the board and I could make at this time.

"As the investigation progressed, I realized there were instances in which I did not live up to the standards and principles of trust, respect and integrity that I have espoused at HP"

In a statement, the board said it had appointed the chief financial officer, Cathie Lesjak, to the job on an interim basis.

Ms Lesjak has been at the company for 24 years and has been chief financial officer since January 2007.

Mr Hurd took over the top spot of HP in 2005, when he succeeded Carly Fiorina, who was unable to increase profitability despite the company's $19 billion acquisition of Compaq in 2002. Before that, Mr Hurd had spent 25 years at NCR in Dayton, Ohio -- the last two years as its president and chief executive.

The company also released preliminary results for its third quarter. HP said it earned 75 cents a share, compared with 67 cents in the period a year ago. Excluding one-time items, earnings were $1.08 a share, slightly more than the $1.07 expected by analysts. Revenue rose 11 percent, to $30.7 billion; analysts were expecting $30 billion.

On Twitter, it's follower quality not quantity that matters