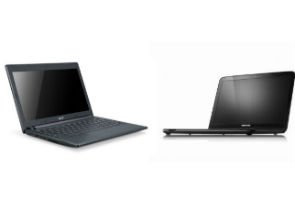 Highlights
Google will try to win more converts to a computer operating system revolving around its popular Chrome Web browser with a new wave of lightweight laptops built by Samsung Electronics.

Tuesday's release of the next-generation Chromebooks will give Google and Samsung another opportunity to persuade consumers and businesses to buy an unconventional computer instead of machines running on familiar software by industry pioneers Microsoft Corp. and Apple Inc.

Unlike most computers, Google's Chromebooks don't have a hard drive. They function like terminals dependent on an Internet connection. The laptops come with 16 gigabytes of flash memory - the kind found in smartphones, tablet computers and some iPods. Two USB ports allow external hard drives and other devices to be plugged into the machines.

Chromebooks haven't made much of a dent in the market since their debut a year ago. In that time, more people have been embracing Apple's iPad and other tablet computers - a factor that has contributed to a slowdown in sales of personal computers.

The cool reception to Chromebooks has raised questions about whether Google misjudged the demand for computers designed to quickly connect to its dominant Internet search engine and ever-expanding stable of other online services, ranging from email to a recently introduced file-storage system called Drive.

"The Chromebooks have had less to offer than tablets, so they haven't been that interesting to consumers," said Gartner analyst Mika Kitagawa.

Google says it always intended to take things slowly with the Chromebooks to give its engineers time to understand the shortcomings of the machines and make the necessary improvements.

"This release is a big step in the journey to bringing (Chromebooks) to the mainstream," said Sundar Pichai, Google's senior vice president of Chrome and apps.

The upgraded laptop, called "Series 5 550," is supposed to run two-and-half times faster than the original machines, and boasts higher-definition video. Google also added features that will enable users to edit documents offline, read more content created in widely used Microsoft applications such as Word and Excel, and retrieve material from another computer at home or an office. More emphasis is being placed on Chrome's Web store, which features more than 50,000 applications.

The price: $449 for models that only connect to the Internet through Wi-Fi and $549 for a machine that connects on a 3G network. Samsung's original Chromebooks started out with prices ranging from $429 to $499. Like the original Chromebooks, the next-generation machines feature a 12.1-inch screen display and run on an Intel processor.

Google Inc. and Samsung also are introducing a "Chromebox" that can be plugged into a display monitor to create the equivalent of desktop computer. The box will sell for $329.

The latest Chromebook and new Chromebox will be available online only, beginning in the U.S. on Tuesday, followed by a Wednesday release in the United Kingdom. The products will go on sale in brick-and-mortar stores for the first time in still-to-be-determined Best Buy locations next month.

The expansion beyond Internet-only sales signals Google's determination to attract a mass audience to its Chromebooks, just as it's done with smartphones running on its Android software. More than 300 million mobile devices have been activated on Android since the software's 2008 release.

Without providing specifics, Pichai said several other computer manufacturers will release Chromebooks later this year. Google plans to back the expanded line of Chromebooks with a marketing blitz during the holiday shopping season in November and December.

One reason Google is confident Chromebooks will eventually catch on is because the Chrome Web browser has attracted so many fans in less than four years on the market. The company says more than 200 million people worldwide currently are using the Chrome browser.

Like other laptop and desktop computers, the Chromebooks will have to contend with the accelerating shift to the iPad and other tablets. The iPad 2, an older version of Apple's tablet line, sells for as little as $399, undercutting the new Chromebook. Other low-cost tablets are expected to hit the market later this year. One of them might even be made by Motorola Mobility, a device maker that Google bought for $12.5 billion earlier this month. Google so far hasn't commented on Motorola's future plans for the tablet market.

The new Chromebooks also are hitting the market at a time when some prospective computer buyers may be delaying purchases until they can check out machines running on Windows 8, a makeover of Microsoft's operating system that is expected to be released in September or October. Microsoft designed Windows 8 so it can be controlled through touch as well as keyboards. That versatility is expected to inspire the creation of hybrid machines that are part laptop, part tablet.