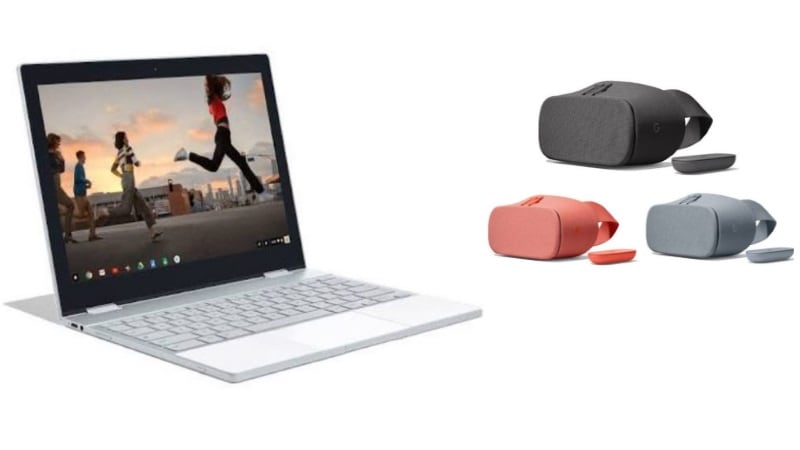 Ahead of Google's Pixel event on October 4, several leaks regarding the company's upcoming devices have now surfaced on the Internet. We already told you about the leaks on Pixel 2 and Pixel 2 XL smartphones but the details on the company's upcoming Chromebook - Pixelbook, the mini variant of its Home smart speaker, and the next generation of Daydream VR headsets, have also been leaked.

First talking about the details on the upcoming Chromebook, Droid Life reports that the Pixelbook will be a high-end product in the category, just like the Chromebook Pixel. The Google Pixelbook will reportedly come with a pressure-sensitive stylus, called the Pixelbook Pen, and will be offered in three storage variants: 128GB, 256GB, and 512GB. The 128GB storage variant has been tipped to be priced at $1,199 (roughly Rs. 77,200), while the 256GB and 512GB variants are expected to be priced at $1,399 (roughly Rs. 90,000), and $1,749 (roughly Rs. 1.12 lakhs) respectively by the company. Notably, the Pixelbook is said to fold into a tablet, which differentiates it from earlier Chromebook Pixel devices.

Coming to the Daydream VR headset, the new generation of the wearable has now been leaked in renders. While specific details are still not available about the upcoming product, it is believed to be made available by the search giant in Charcoal, Fog, and Coral colour variants. Notably, just like the previous generation, a remote controller can be seen alongside the new generation Daydream VR headset in leaked images. The new wearable has been said to cost $99 (roughly Rs. 6,400).

Finally coming to the small-sized smart speaker from Google, Google Home Mini has also been leaked in renders as well. The smart home speaker, which might remind you of Amazon Dot, has been tipped to be made available in Chalk, Charcoal, and Coral colours by Google. The Google Home Mini is said to be priced at $49 (roughly Rs. 3,200) by the company.

Though these leaks appear to be quite credible, we will like to point out that these are still leaks and should be treated as such. Google's Pixel event is just few days away and the company is likely to launch its new devices at the event. Therefore, it would be wise to wait and hear the official word.