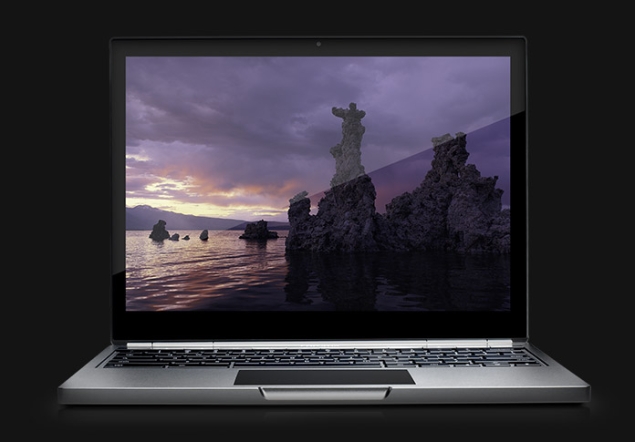 Google is adding a new and more expensive touch to its line of Chrome laptops in an attempt to outshine personal computers running on software made by rivals Microsoft and Apple.

The Chromebook Pixel unveiled Thursday includes a nearly 13-inch display screen that responds to the touch or swipe of a finger. That duplicates a key feature in Microsoft Corp.'s Windows 8, a dramatic makeover of the world's leading operating system for PCs.

Google Inc. designed and built the Pixel for "power users" - a fastidious and generally more affluent segment of the PC market willing to pay more for machines equipped with compelling features and components not found in cheaper laptops.

The strategy is a departure for Google, which had positioned Chromebooks based on its Chrome operating system as affordable options for homes and offices looking for a quick and easy way to connect to the Web. Google has been partnering with PC makers to make Chromebooks over the past two years. Among them: Acer Inc. makes a bare-bones Chromebook for just $199, while Samsung Electronics Co. sells one for $249.

The Pixel, which Google is building without a partner, will cost $1,299 for a Wi-Fi only model with 32 gigabytes of flash storage. A 64-gigabyte machine that can connect on both Wi-Fi and a 4G LTE cellular network will cost $1,499. That's the same price as the cheapest MacBook Pro with a comparable screen, though the Apple laptop comes with 128 gigabytes of storage.

Google believes Pixel is a better value than the Air, given its higher-resolution screen with touch controls. Google is also throwing in 1 terabytes of free online storage in its data centers for three years - a benefit that Pichai estimated would cost $500 to $600.

The Pixel "will stand up very, very well to the MacBook Air," Pichai said. "The goal here is to push the boundaries to deliver the best laptop at the best possible price."

Though its popular iPad has a touch screen, Apple has shunned touch-screen laptops. Apple figures that because people use laptops with the screen in front of them, rather than in their hands or laps, it's not a pleasant experience to constantly have to reach out to touch the screen.

Microsoft, on the other hand, considers touch screens to be central to all computing environments. Windows 8 was designed to make desktop and laptop computers work more like tablet computers. Computers with touch-screen monitors can respond to touch along with old-style mouse and keyboard commands.

Google's online Play store will begin selling the Pixel in the U.S. and U.K Thursday, with BestBuy.com expected to take orders on Friday. A hands-on experience with the Pixels also will be available beginning Friday in 10 of Best Buy's retail stores in California, Minnesota, Washington state, Virginia and New York.

Pichai declined to say how many of the lower-priced Chromebooks have been sold, but said the models have ranked as the most popular laptop sold by Amazon.com Inc. for the past four months.

The free online storage is being included with the Pixel to overcome the laptop's lack of a hard drive. Like other Chromebooks, the Pixel functions like a terminal dependent on an Internet connection to get to information and applications stored in large data centers run by Google or other technology providers.

Spurred by the growing popularity of smartphones and tablet computers, Google is betting more people will prefer having data, photos and video stored in remote data centers instead of individual hard drives so the content can be accessed from any Internet-connected device.

Google's expansion into the high-end of the laptop market immerses the Internet search and advertising company more deeply into the business designing and making gadgets.

The company is already a major player in the mobile device market through its Android software. To help promote Android, Google also has designed a line of smartphones and tablets under the Nexus brand. The company also owns smartphone maker Motorola Mobility, which it bought for $12.4 billion last year.

Google's deepening involvement in hardware has ignited speculation that the company might eventually open its own chain of stores to sell its products, just as Apple and Microsoft already do. Pichai didn't address that in a response to a question on that topic at Thursday's event.

Apple and Microsoft already have been hurt by the increased competition from Google. Most smartphones and tablets running on Google's free Android software cost less than Apple's iPhone and iPad, helping to siphon sales away from those devices. Sales of PCs running on Windows also have been sagging during the past year, partly because consumers are relying more on Android devices.

Google says it expects to make a small profit on each Pixel sold, but the company figures to make more money from the online traffic delivered from the machines. Like other Chromebooks, the Pixel is set up to automatically use all of Google's services, including its search engine, Gmail and YouTube video site.

PS4 represents the future of gaming: Sony
Microsoft India holding AppFest at over 50 locations on February 26