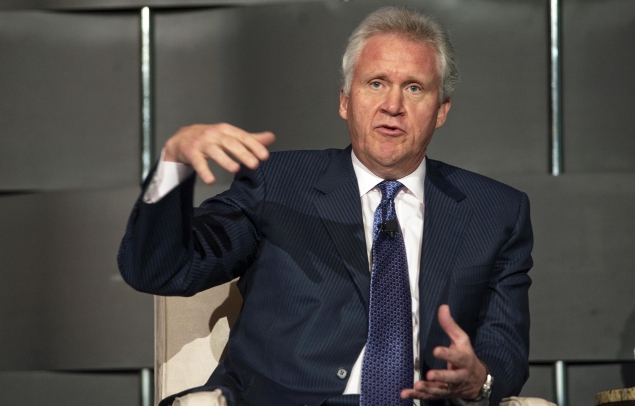 General Electric, famous for branded hardware from lightbulbs to turbines, is pushing hard into software, chief executive Jeffrey Immelt said at the Minds and Machines conference on Thursday.

"In an industrial company, avoid software at your own peril," Immelt said in a discussion with Marc Andreessen, the famously pro-software venture capitalist, and Chris Anderson, editor of Wired magazine.

Software and analytics have becoming increasingly important for many of GE's clients, Immelt said. A group of GE's radiology customers, for example, told him earlier this week that if given $10 million to invest, they would put it into analytical tools like post-processing algorithms; ten years ago, the answer would have been brain-imaging machinery, he said.

The same thinking applies to GE customers in areas such as energy. "The grid has tremendous opportunities for application of both software and analytics," he said.

In some areas, "a software company could disintermediate GE someday," Immelt said. "And we're better off being paranoid about that."

General Electric last year generated some $42 billion in revenue from services - a higher margin business that Immelt sees as key to growing the company's profit in a weak global economy. The new push into software is a bid to expand its service offering while also defending its position in big industrial markets such as electric turbines, jet engines and railroad locomotives.

On Wednesday, the company said it was planning a new push into services.

Andreessen suggested a good way for old-line companies to gain an edge in software is to invest in leading software start-ups.

Just as he admitted corporate venture-capital had a bad reputation for investing in young companies at the height of bubbles, Immelt jumped in. "We're the dumb money," he quipped, as the audience laughed.

Andreessen stood his ground. "Engaging in the ecosystem is a big deal," he said. "Showing up with a check is an excuse to have the conversation."

His love of software aside, Immelt defended GE's core businesses.

"In many ways, our products are more resilient than things like computers," he said, citing the huge capital costs required. "The moat around this baby is wide," he added, waving at a large jet engine on the side of the stage.

Andreessen too had some kind words for hardware, citing Lytro, the camera company his firm has backed. "If you had told me three years ago we would fund a camera company, I would say no way," he said.

Andreessen Horowitz, his venture firm, has also backed a stealth robotics company and Jawbone, the maker of headsets and a health-monitoring device, he said.

Both men finished by getting back to their core strengths. Andreessen said 2012 would be remembered as the year of software as a service, in the style of companies such as Workday and Salesforce.

Looking forward, Immelt said 2013 would be the year of manufacturing, when companies see it as a competitive advantage and society sees it as a creator of middle class jobs.

"It's a time when manufacturing has become sexy again," he said.