For HP and Dell, troubles at the top have yet to hurt the bottom line 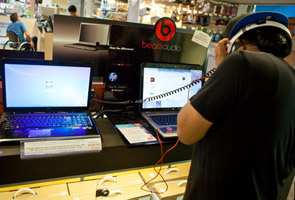 Highlights
Executives from Hewlett-Packard and Dell, America's two largest computer makers, ought to be rejoicing when parents open their wallets in August to arm their offspring with shiny new computers for the school year.

But HP and Dell find themselves in the middle of a summer of tumult. Scandal has rattled both boardrooms and tarnished the reputations of their chief executives.

Yet both companies delivered solid quarterly results on Thursday, easing investors' concerns. Some analysts warned that boardroom troubles at HP and Dell could affect those companies' performance at a time when competition from the nimble PC companies in Taiwan -- Acer and Asustek -- was increasing.

"When a company stumbles, many of their hardware and software partners try to negotiate deals on better terms, and we are hearing that may be happening with both HP and Dell," said Richard Doherty, research director for the Envisioneering Group, a technology research and consulting company. "Over the next few weeks and months, if trouble at these companies continues, we may see ripples."

Mr Doherty cautioned that it often took some time for these kinds of situations to play out and that boardroom issues failed to register with consumers. But both suppliers and corporations tend to try and seize on a perceived weakness, he said.

HP spent the last two weeks answering questions about the abrupt resignation of its chief executive, Mark V Hurd. The company's board urged Mr Hurd to resign after an investigation into a sexual harassment complaint from an HP contractor.

While HP's board found no evidence of sexual harassment, it concluded that Mr Hurd's personal relationship with the contractor, who had acted in racy films, was a conflict of interest and that Mr. Hurd had filed fraudulent expense reports.

Supporters in both camps have since engaged in a nasty public spat, leaking details about HP's investigation.

At Dell last month, the company paid $100 million to settle charges of accounting fraud leveled by the Securities and Exchange Commission, which examined about five years of the company's financial results. The SEC accused Dell of misleading investors by playing down how much the company had come to rely on rebates from the chip maker Intel to meet its earnings goals.

Michael S Dell, founder and chief executive at Dell, agreed to pay $4 million as well, while not admitting any wrongdoing.

During a subsequent shareholder vote, about 25 percent of the votes cast opposed Mr Dell's presence on the company's board. Historically, shareholders had shown near unanimous support for Mr Dell.

While these issues continue to play out, sales of computing gear to consumers and corporations made by HP and Dell have marched along.

HP reported Thursday that its third-quarter revenue rose 11 percent to $30.7 billion from the $27.6 billion it posted in the same period a year ago. Its net income rose 6 percent, to $1.8 billion, or 75 cents a share.

But both HP and Dell can hear the footsteps coming from Taiwan. Acer has introduced an ultra-low-cost business model that centers on selling laptops through retail partners, while Asustek has flooded the market with flashy laptops and game-playing products.

Last year, Acer surpassed Dell in PC sales, the first time that a foreign PC maker could boast being the world's second-largest computing company, behind HP And through the first half of this year, Acer has been closing the gap on HP for the title of the world's No 1 PC seller.

For its part, Asustek climbed into the top five in the second quarter, according to the research firm Gartner, with 78.5 percent growth.

"In general, I would say, bring it on," Ms Lesjak said.

Dell has tried to counter the Asian onslaught by selling in brick and mortar retail stores and sending more of its manufacturing overseas to lower costs. And, as the largest seller of corporate PCs, Dell hopes to ride a big businesses refresh cycle as the economic recovery gains strength.

The entire PC market is in the throes of great change with mobile phone makers and carriers getting into the tablet market. Both HP and Dell will have to contend with those upstarts, while trying to establish their own place in the tablet world.

Before Mr Hurd departed, he cleared the acquisition of the smartphone company Palm to give HP its own technology for competing in the mobile and hand-held market.