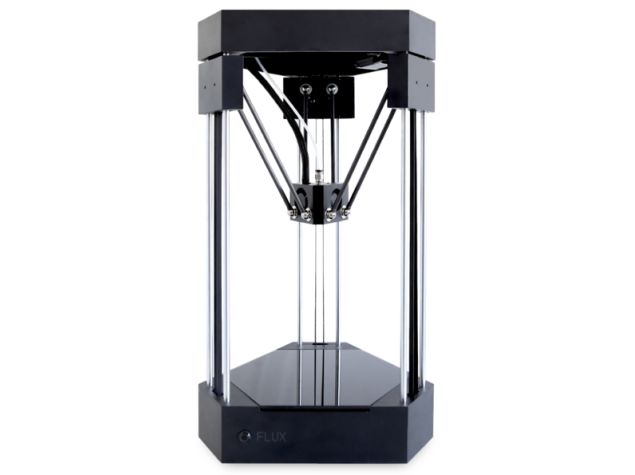 In our weekly series on crowdfunding, we check sites like Indiegogo and Kickstarter to find the newest and most interesting projects to back. In recent times, some of the most exciting new products like the Oculus Rift VR headset and the Pebble Smartwatch got their start thanks to crowdfunding, instead of being made by a giant corporation. We try and find new projects that are worth backing, because they are unique, fun, or possibly even game changers.

The FLUX is meant to be used as a multipurpose 3D printer, whose functionality can be changed thanks to a modular upgrade system. That's an interesting new twist to 3D printers, and something we haven't seen offered elsewhere.

The basic FLUX uses a technique called FFF - fused filament fabrication - for 3D printing. This is the most common type of 3D print technology in the small model printers being used. The machine also comes with a 3D scanner built into the base of the FLUX, so you can scan models instead oh having to design or download everything you want to print.

That's a handy add-on, but the cool part is the modular nature of the printer. At launch, you'll be able to swap out the additive 3D printer with a laser engraving module, which will let you incise designs into materials like wood with great accuracy. Future modules that the team mentions in the Kickstarter page include a dual extruder, so you can print items with more than one material, and a pastry extruder to 3D-print chocolates.

This flexibility makes FLUX a very interesting project, and makes it sound much more versatile than most 3D printers that are currently available. The video below shows how the printer works.

The estimated delivery for the FLUX is July 2015, worldwide, but shipping costs will be extra, over and above whatever you pledge.

To see more updates from the world of crowfunding, click here.