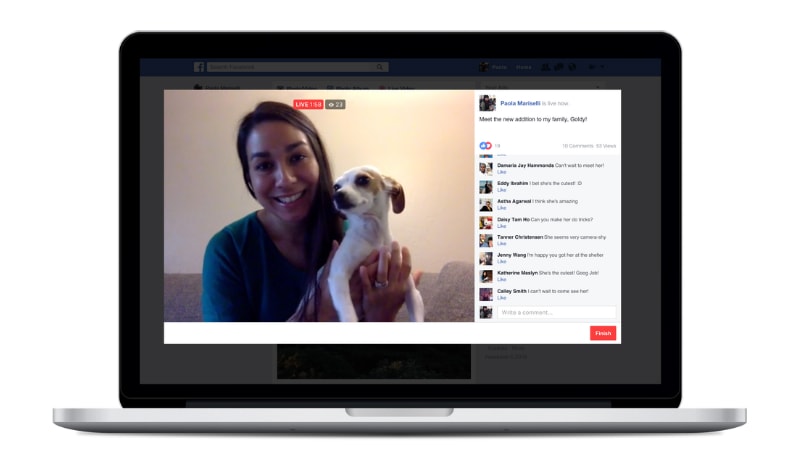 Facebook Live was first only available to mobile devices (and Pages), but it has now expanded its services for all users to be able to stream directly from desktops. This ability brings more options for live broadcasters to directly go live through a webcam, and also shows Facebook's seriousness towards live streaming and its push for video on its platform.

Moving forward, you will now see a live video button on Facebook's desktop site as well. Earlier, the feature was made available to Pages, but now everyone with a Facebook account can go live through a webcam. Facebook has also added the ability to attach sophisticated hardware to ensure high quality broadcasting if users so prefer.

Furthermore, gamers and gaming companies can also use Facebook for attracting a streaming audience on their Profiles and Page as well. "If you're a gamer, this new feature makes it easier than ever to stream your PC gameplay to friends and followers and engage with them while you play. If you're giving your friends or followers a tutorial or how-to guide, you can incorporate on-screen graphics, titles, and overlays. Or if you're an artist, you can go live and switch seamlessly between cameras as you narrate the process," the company notes.

The Live Video option is available alongside Check in, Activities, and others on the top of the NewsFeed/ Timeline. Starting a live video is as easy as posting a Status, and it shows up the same way it did when you posted through your phone.

Recently, it was reported that Facebook, after the success of its Live video feature, is looking to broadcast original TV-like programmes from various genres and may pay hefty amount for it. Facebook was interested in original content from a slew of different genres, from sports to science, and the social networking giant was willing to pay for the content and could offer in the low- to mid-six-figure range per episode for scripted content. Facebook may go for weekly series and shows that last around 30 minutes.