Wonder How People Exchanged Mails on the Move in 1984? Watch This Video to Find Out

The two-minute clip shows a man travelling on a train and attempting to receive messages from his home over the telephone, using a large modem 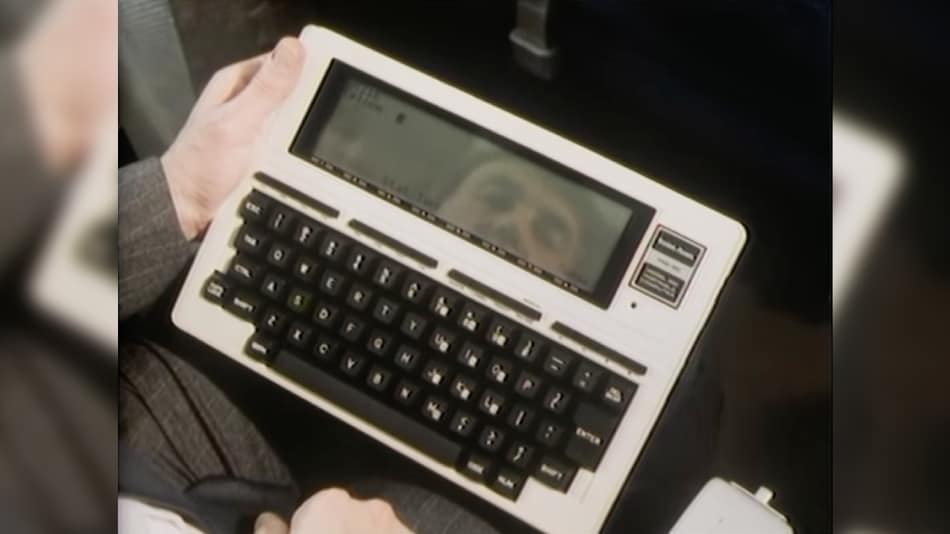 A surreal video from 1984 has gone viral and it illustrates just how far mankind's relationship with technology has come. Today, it takes less than a minute to log into our accounts and send or check emails. But have you ever wondered what it would have been like more than 35 years ago. It was cumbersome, with large equipment and a prolonged process to access mails. The video features one of the first-ever notebook-style computers and a large acoustic modem that resembles the receiver of a telephone.

The two-minute video was posted on Twitter by journalist Jon Erlichman. It shows a British man traveling on a train in Japan and his attempts to receive messages from his home over the telephone, using a large modem.

It shows the man walking up to the telephone line and attaching the modem to the two ends of the telephone receiver, but then he realises the telephone onboard the train is a payphone and he does not have enough change to make an international call to England. “We will need a sack of money in here to do it,” he says.

Even when the line was tested, it was too noisy for that particular modem, the man adds. The video then cuts to a Japanese hotel room, where the man is sitting next to a telephone and making another attempt. “Maybe I'll have better luck (this time),” he says, and starts making a call to London. Once he is through, he dials the computer and waits for a computer tone on his end. “Yes, there it is. We got a very good connection here.”

The man immediately stuffs the modem into the receiver “very firmly” and the connection is set with the notebook burping out electronic text messages as it talks to the computer directly in London. The man dials his 10-digit account number, then his personal ID, and “off we go with the messages.”

Since being posted, it has received over 22,000 likes. A number of people have also commented on the video, with some reminiscing about “simpler times.”

When I see how far we came from that, I start to believe in warp drive 50 years from now!
Vulkan I come! I plan to retire on that planet.

Oh this is pretty ???? cool during this time I would have been so interested in something like that it was pretty expensive though it was about a couple thousand dollars ????

I think I've got the code and password. RIP.

There was a payphone in the train? IN A MOVING TRAIN? ????

I thought the idea of "electronic" mails is a new thing
If I were supposed to figure a date, it would be definitely after the 2000's

Imagine how he would deal with the spam we receive nowadays...

Of course, the show was on tv once without any way for most viewers to record/replay so you only had that one shot to suddenly know to concentrate on where his fingers pressed to grok the 10 digit code.

The clip is an excerpt from Thames TV's computing-themed series Database that aired on June 7, 1984. The presenter in it is Tony Bastable, who is better known as one of the original presenters of the children's magazine programme Magpie, The Daily Mail reported.

NewNew App Is a 'Human Stock Market' That Lets You Pay to Tell Other People What to Do
Bitcoin Slides Below $40,000, Ether Tumbles Amid China Restrictions and Elon Musk’s Tweets