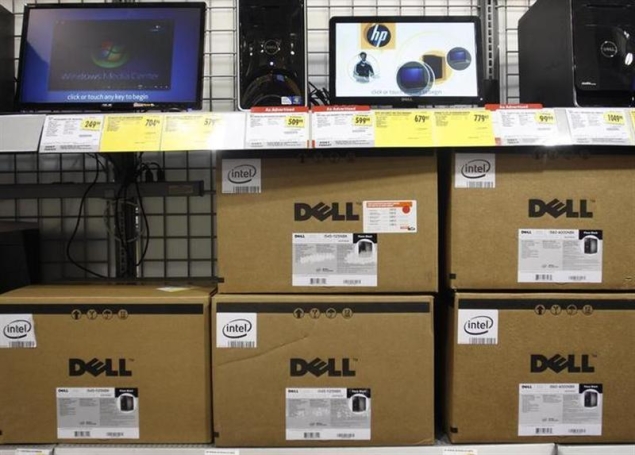 The meeting was called and then adjourned minutes later, after shareholders gathered at Dell's headquarters in Texas. Postponement of the vote until Wednesday buys time for Dell, the company's co-founder and chief executive, to win over naysayers for a deal that could be the largest buyout since the financial crisis.

Complicating matters, billionaire investor Carl Icahn, who has amassed an 8.7 percent stake in Dell, is leading a charge with major shareholder Southeastern Asset Management against the buyout with an offer of his own. He and others say Michael Dell's deal undervalues the world's No. 3 personal computer maker.

Investors are divided over Dell's prospects. Some are ready to cash out of a company increasingly vulnerable to a crumbling PC market. Dell has become a shadow of the company founded out of Michael Dell's dorm room in 1984, which rapidly grew into a leader in the global market and a model of innovation.

Others remain convinced the company can transform itself into a dominant provider of business computing services, under Dell's leadership or otherwise.

In the week leading up to Thursday's meeting, Icahn's team and Dell's special board committee, which supports the CEO's offer, flooded shareholders with letters and documents to argue their positions.

Vanguard and BlackRock Inc are now on board with the proposal, sources familiar with the matter told Reuters on Thursday.

Still, they said Michael Dell and private equity partner Silver Lake fell about 100 million shares short of the 735 million that they need for the buyout to pass.

A large chunk of non-votes - which count as "nays" - from mainly retail investors, helped account for the shortfall, several investors told Reuters.

Only 77 percent of eligible shares were voted as of Thursday, the Wall Street Journal cited people familiar with the matter as saying. Dell declined to comment on that ratio, which suggests a high number of abstentions.

Some arbitrage investment funds may also hold out hope that Michael Dell will bump up his offer price, they added on condition of anonymity. Arbitrageurs, who typically make short-term bets around the outcomes of deals and other major transactions, own roughly 350 million shares or 20 percent of the company's outstanding stock, one of the investors estimated.

Michael Dell may have to raise his $13.65-a-share offer to secure the deal, analysts and investors say. But other sources have said he and Silver Lake remain reluctant to pay more for a company that traded at about $10 before news of the buyout surfaced.

"The delayed vote may speak to the Silver Lake/Dell transaction not finding necessary support," said Topeka Capital Markets analyst Brian White. "A higher bid may be necessary to consummate this transaction."

Unhappiness
It is unusual for corporations to adjourn shareholder meetings on such short notice, but governance experts say it can be done if the company bylaws allow it.

Over the next week, the board will encourage the apparently large number of shareholders that had not cast votes to support the deal, said mergers expert Brian Quinn, an associate professor at Boston College Law School.

"To encourage these votes to come out, they will likely also try to re-engage Silver Lake to seek out a higher price," he added.

Icahn was quick call the adjournment "unfortunate" and reiterate that he found Dell's offer too low.

"This delay reflects the unhappiness of Dell stockholders with the Michael Dell-Silver Lake offer, which we believe substantially undervalues the company," he said in a statement issued with Southeastern. "This is not the time for delay but the time to move Dell forward."

Vanguard and BlackRock had previously opposed the deal, but ultimately switched sides, a source said, requesting anonymity because the matter is not public.

Other investors previously seen as swing votes, such as State Street Corp, Bank of New York Mellon Corp and Invesco also voted in favor of the deal on the eve of the shareholders' meeting, the source said.

Board member Alex Mandl, chairman of the special committee overseeing the buyout, set the new meeting date for Wednesday.

Under so-called majority-of-the-minority voting provisions, a majority of shares, excluding Michael Dell's roughly 16 percent stake, must be voted in favor for the buyout to go through.

Shareholder Ed Benson from San Antonio, one of the many retail investors that account for an estimated 10 to 15 percent of shares in the company, turned up in Round Rock on Thursday but had expected the meeting to be adjourned.

"It's very hard to acquire that many votes," said Benson, who supports the buyout proposal.

But travel agent Linda Bush, who commuted to the meeting from the area, disagrees.

"The majority of people I talked to didn't vote for it," she said. "We need to be paid more".