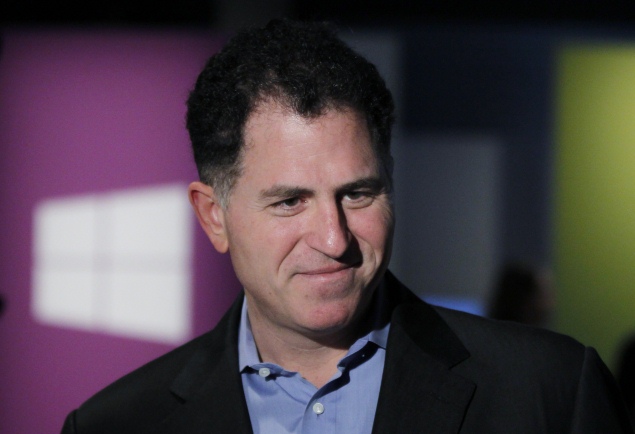 June 15, 2012
Southeastern Asset Management, which owns 146.5 million shares or about 8.4 percent of Dell, contacts CEO Michael Dell to suggest "a going private transaction" and expresses the fund's interest in participating in it.

July 17
Michael Dell meets a representative of private equity firm Silver Lake Partners at a conference and they set up discussions in August. In these talks, Silver Lake suggests to Dell's founder he should take the company private.

August 11, 13
Michael Dell meets with a representative of another private equity firm, identified in the proxy only as "Sponsor A," to ask what it thought of such a transaction. Sources told Reuters Sponsor A is private equity firm KKR & Co LP. KKR declined to comment.

August 14
Michael Dell informs board member and lead independent director Alex Mandl that he is exploring a buyout but says he has made no decision.

August 17
The board has a teleconference during which Michael Dell briefs them on the take-private idea and discussions surrounding it. The board decides to consider a potential transaction and other strategic alternatives.

September 14
JPMorgan tells the special committee it has identified other financial sponsors as potential buyers but notes that Silver Lake and KKR are best placed as each could complete a transaction with significant committed equity.

November 2
JPMorgan informs Silver Lake and KKR the special committee is not happy with the price ranges.

December 3
KKR withdraws from the process, mainly because it is not comfortable with the risks associated with Dell.

December 4
Silver Lake submits an updated proposal to acquire Dell for $12.70 per share.

December 7
Mandl invites another firm, identified in the proxy only as "Sponsor B," to consider making a proposal. A source told Reuters Sponsor B is private equity firm TPG Capital LP. TPG did not respond to a request for comment.

December 10
Mandl informs Silver Lake its offer price is too low. Silver Lake seeks permission to involve Microsoft Corp, from which it intended to seek financing.

December 23
TPG informs it is withdrawing from the process, primarily due to "risks and uncertainties in the PC business."

January 20
Silver Lake informs Dell it is willing to increase its offer price to $13.50 per share.

January 24
A party identified as "Strategic Party A" expresses interest in purchasing Dell's financial business for about $3.5 billion to $4 billion. Blackstone Group LP also expresses interest in exploring a transaction. It could not be confirmed whether Strategic Party A IS General Electric Co , which sources previously said had been approached by Blackstone. GE has previously declined comment.

January 29
Southeastern informs special committee it would oppose any deal in the range of $14 or $15 per share that did not provide existing large stockholders with an opportunity to participate.

Michael Dell and Silver Lake say they are not interested in pursuing a deal in which any public stockholders would retain an interest.

February 4
Silver Lake ups its offer to $13.65 per share, with the Dell allowed to carry on paying its regular dividend.

March 5
Activist investor Carl Icahn sends a letter to Dell's board stating he is a substantial holder of shares. Icahn later reveals he has $1 billion worth of Dell shares.

March 21
Dell advisor Evercore receives an indication of interest from Strategic Party A for a proposed acquisition of Dell's finance business.

March 22
Blackstone and Icahn Enterprises send proposals to the special committee. Blackstone, which teamed up with Francisco and Insight Venture partners, offers in excess of $14.25 per share for the whole company, while Icahn offers about $15 per share for 58 percent. Under both proposals, Dell would remain a public company.