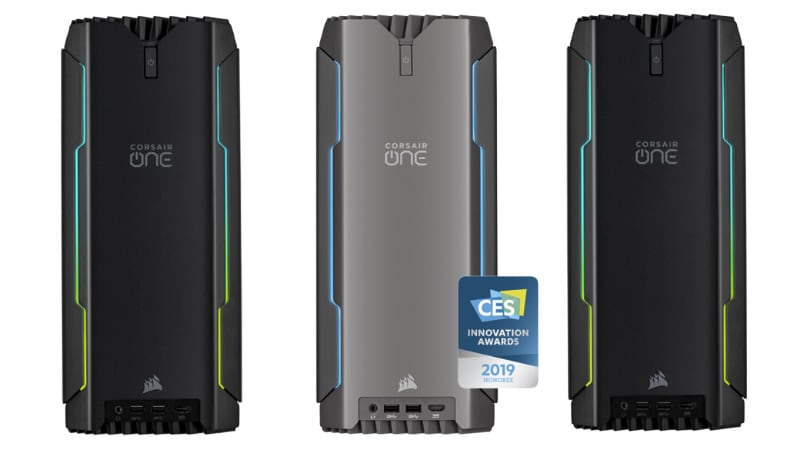 Corsair has launched a new range of gaming PCs at CES 2019. Leading the launch is Corsair One Pro i180, which is powered by a liquid-cooled Intel Core i9-9920X 12-core processor with a top clock speed of 4.5GHz and Nvidia's GeForce RTX 2080 Ti GPU. All this in a small workstation form factor that is claimed to occupy "less than a third" of the space of its more traditional counterparts. The company also announced its new Corsair One i160 and Corsair One i140 gaming PCs that are comparatively more affordable than the One Pro i180.

Starting with the highlight, the Corsair One Pro i180, the PC has been developed in partnership with Intel. It's clad in a 2mm-thick aircraft-grade bead-blasted aluminium gunmetal housing. Besides the earlier mentioned Intel Core i9-9920X that delivers a 24-thread performance at speeds up to 4.5GHz, and a GeForce RTX 2080 Ti GPU with real-time ray tracing, it sports 32GB of quad-channel Corsair DDR4 memory, support for up to four 4K monitors and VR, 960GB of high-speed M.2 SSD storage and 2TB of HDD capacity.

The Corsair One Pro i180A has a completely redesigned internal layout, in conjunction with a patented convection-assisted liquid cooling system for both the processor and graphics card. This expels hot air through a vent in the top of the chassis, allowing the machine to stay cool despite its compact 12-litre volume.

These high-end specs are aimed at delivering high performance for content creators, game designers, and video editors, among other system intensive applications.