China is leading chip demand, analysts said, as cloud service providers such as Alibaba Group, Tencent, and Baidu quickly responded to the government's effort to contain the virus. 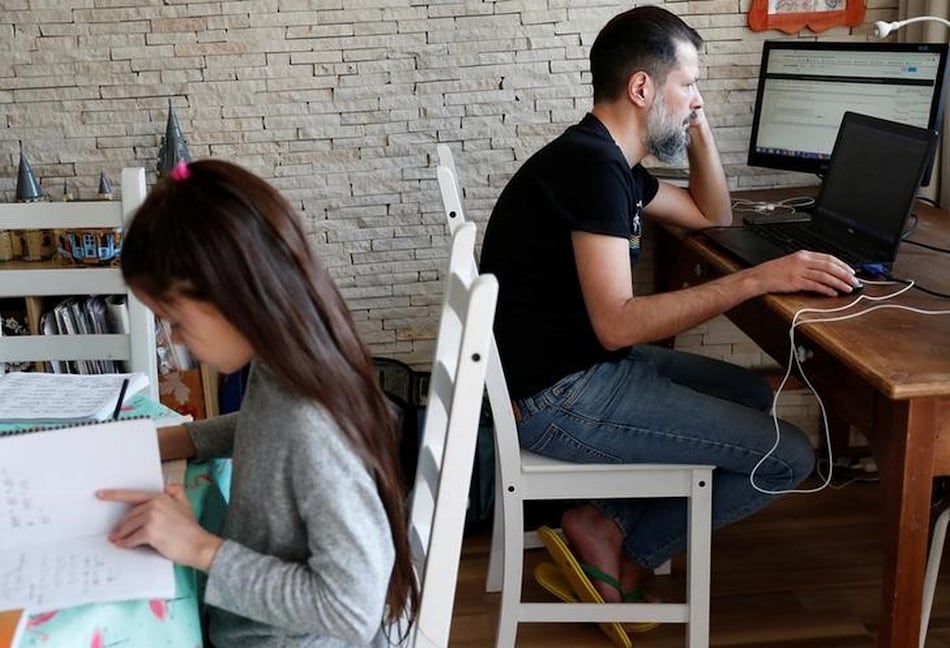 Csaba Posta, IT specialist working from home, with his daughter Vilma during the spread of coronavirus

With more employees working from home to help slow the spread of the coronavirus, demand is surging for laptops and network peripherals as well as components along the supply chain such as chips, as companies rush to build virtual offices. Many firms have withdrawn earnings forecasts, anticipating a drop in consumer demand and economic slump, but performance at electronics retailers and chipmakers is hinting at benefits from the shift in work culture.

Over the past month, governments and companies globally have been advising people to stay safe indoors. Over roughly the same period, South Korea - home of the world's biggest memory chip maker, Samsung Electronics - on Monday reported a 20 percent jump in semiconductor exports.

Pointing to further demand, nearly one in three Americans have been ordered to stay home, while Italy - where deaths have hit 5,476 - has banned internal travel. Worldwide, the flu-like virus has infected over 300,000 people and led to almost 15,000 deaths since China first reported the outbreak in December.

"With more people working and learning from home during the outbreak, there has been rising demand for internet services ... meaning data centres need bigger pipes to carry the traffic," said analyst Park Sung-soon at Cape Investment & Securities.

A South Korean trade ministry official told Reuters that cloud computing has boosted sales of server chips, "while an increase in telecommuting in the United States and China has also been a main driver of huge server demand."

In Japan, laptop maker Dynabook reported brisk demand which it partly attributed to companies encouraging teleworking. Rival NEC said it has responded to demand with telework-friendly features such as more powerful embedded speakers.

Australian electronics retailer JB Hifi  also said it saw demand "acceleration" in recent weeks from both commercial and retail customers for "essential products they need to respond to and prepare" for the virus, such as devices that support remote working as well as home appliances.

"This set the precedent for technology companies around the world that offer cloud-based services in their response to helping organisations affected by coronavirus."

UBS last week forecast average contract prices of DRAM chips to rise as much as 10 percent in the second quarter from the first, led by a more than 20 percent jump in server chips.

It said it expects DRAM chips to be modestly under supplied until the third quarter of 2021, with demand from server customers rising 31 percent both in 2020 and 2021.

"You've got lots of OEMs and systems integrators in the global market who have intense demand for memory now," said Andrew Perlmutter, chief strategy officer at ITRenew, a company that buys and reworks used data centre equipment for resale.

"Nobody is shutting down their factories - it is still production as normal - but people worry about memory supply in particular, so they want to get out ahead of production."

Half of those polled expected business to normalise by July, and nearly three-quarters pointed to at least October.