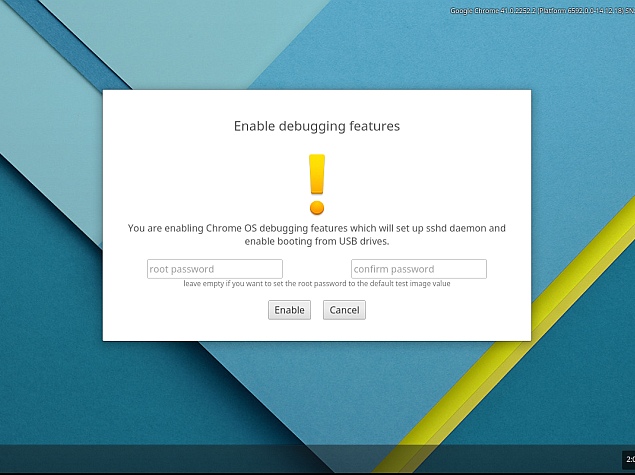 Chromebook users who have been itching to install another operating system on their machines can now do so. Users have been given the ability to boot from USB so that they can install an OS image from a USB drive. The Chrome OS team explains however, the feature is only for advanced users.

The new feature is part of the 'Debugging Features' available when a Chromebook is booted in the Developer Mode. To install an OS image via USB, users will be required to enable 'Debugging Features' by switching to the Dev Channel, powerwash their device, and click follow these instructions.

The other new Debugging Features include the ability to modify the OS files by removing rootfs verification, enable SSH access to the device using the standard test keys so that tools like cros flash can be used, and set both the dev and the system root login password to a custom value so users can manually SSH into the device.

"Since Debugging features lower system security, you can enable them only during the Out of the Box Experience," added Francois Beaufort on his Google+ account.

The Acer Chromebook 15 range (CB5-571) will be available in variants offering either a 16GB or 32GB SSD drive and either 2GB or 4GB or RAM. The company notes that the "exact specifications, prices and availability will vary by region". The new Acer Chromebook 15 will be available in two display versions - one offering a full-HD (1920x1080 pixels) screen resolution and another offering a HD (1366x768 pixels) resolution.

The company also announced that it would expand its Chromebook 13 range of laptops with new touchscreen models. It will be available in Europe, the Middle East and Africa (EMEA) starting January at EUR 329 (Rs. 24,938 approximately).