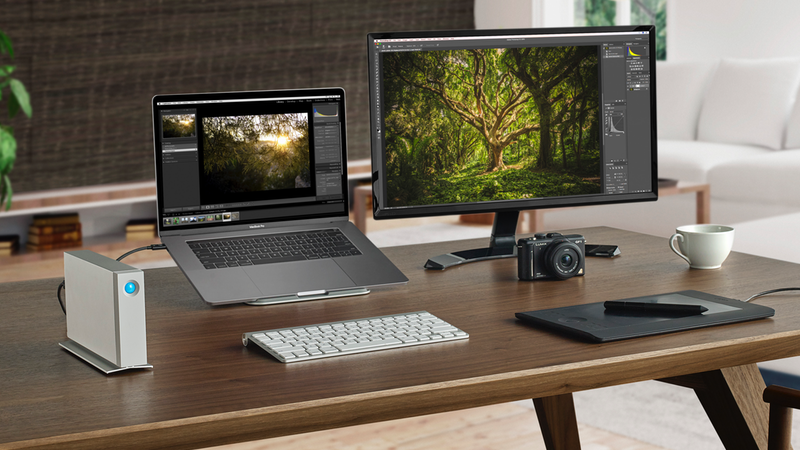 LaCie, a popular maker of premium external drives, and since 2014 a part of Seagate, has on the side lines of CES 2017 announced upgraded versions of their d2 and Rugged models.

The LaCie d2 is an external drive that is meant to be kept on a desk, and has a USB Type-C port to connect to the new MacBook Pro models using USB-C to USB-C cables. It supports the newest Thunderbolt 3 and USB 3.1 speeds via that port. Inside the casing, there’s a 7200RPM Seagate Barracuda Pro hard disk, that touts industry-leading performance and reliability.

Based on the new standards, the LaCie d2 can belt out transfer speeds of up to 240MB/s. Thanks to Thunderbolt that supports daisy chaining, you can join up to two 4K displays, a single 5K display or up to 6 LaCie d2 drives, all of which can be connected to the Mac using a single cable. And since USB Type-C can carry power and data simultaneously, it can charge a MacBook Pro from that one single cable too. With a five-year warranty, the LaCie d2 is available in 6TB, 8TB, and 10TB capacities with prices starting at $429.99 (roughly Rs. 30,000).

If you’re looking for a portable solution, then the updated LaCie Rugged drive too comes with USB Type-C support. As the name suggests, this drive can withstand some rough use when compared to typical portable drives. While some variants come with traditional spinning Seagate Barracuda drives, there’s a 1TB SSD variant too with faster transfer speeds of up to 510MB/s. According to LaCie, that means 100GB of data can be transferred in about three minutes and accessing data from the drive in applications like Adobe Lightroom will be more responsive. The LaCie Rugged drive comes in 2TB, 4TB, and 5TB HDD versions and 500GB, 1TB SSD versions. Prices start at $249.99 (roughly Rs. 17,000).

The Legend of Zelda: Breath of the Wild Release Date Same as Nintendo Switch Except in Europe: Report
CES 2017: TVs Grab the Spotlight