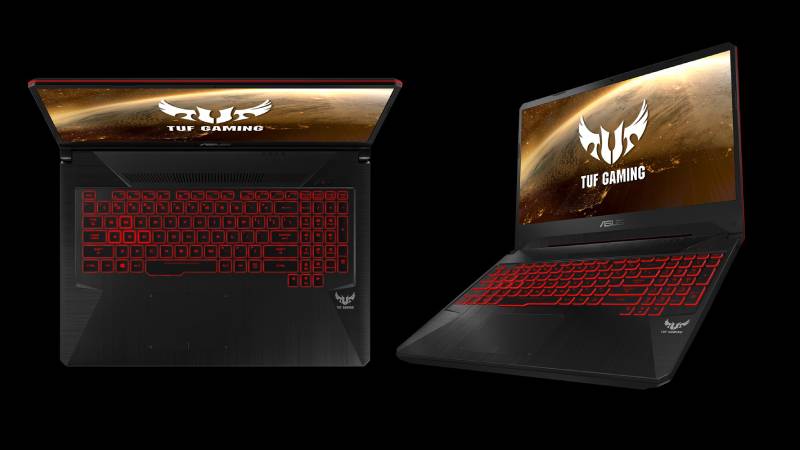 Asus has launched two new gaming laptops in its entry-level TUF Gaming series. The TUF Gaming FX505DY and TUF Gaming FX705DY are both based on the recently announced AMD Ryzen 5 3550H processor and feature AMD's discrete Radeon RX 560X GPU as well as the CPU's integrated Radeon Vega 8 graphics capabilities. These two laptops were first announced at CES 2019 in January this year. While the 15.6-inch TUF Gaming FX505DY will be exclusive to Amazon in India in two variants starting at Rs. 59,990, the larger 17.3-inch TUF Gaming FX705DY will be sold online as well as offline with only a single configuration priced at Rs. 69,990. These models join the existing TUF Gaming FX505 and FX705 models based on Intel CPUs and Nvidia GPUs.

Asus touts the design of both laptops, which both feature slim ‘NanoEdge' screen borders and reinforced bodies that meet the MIL-STD-810G specification for durability. The company says that both models have passed through strenuous testing and can withstand extreme environments. While both laptops are said to be able to survive vibrations, accidental knocks and short falls, the smaller FX505DY model is also certified to survive falls from a height, although the extent of this has not been specified.

The new TUF Gaming series laptops have a custom-designed thermal solution with independent fans for the CPU and GPU, both of which are designed to prevent the buildup of dust. Other design touches include LED-backlit keyboards with full numeric keypads, highlighted WASD keys, thicker space bars, and full-sized arrow keys. Both models will be available in two colour options – Red Matter, which feature red backlighting and trims, and Gold Steel, which will feature RGB LEDs.

The new AMD Ryzen 5 3350H processor is a 35W model with four cores and multi-threading, and is part of AMD's second-gen ‘Picasso' platform using the Zen+ CPU architecture with an integrated Radeon Vega 8 GPU. It is clocked at 2.1GHz with a boost speed of up to 3.7GHz.

The new TUF Gaming FX505DY and FX705DY laptops are listed online with 8GB of RAM, though Asus only says that they can work with up to 32GB of RAM. The smaller FX505DY will be sold with a 1TB SSHD and an optional 128GB SSD, while the FX705DY is only listed with a 1TB SSHD. The two laptops feature 48Whr and 64Whr Li-ion batteries and weigh 2.2Kg and 2.7Kg respectively.

Both share several common specifications, including full-HD resolutions for their screens, Wi-Fi 802.11ac, Bluetooth, and DHS:Headphone X audio enhancement. Both also have the same complement of ports including two USB 3.1 Gen1 ports, one USB 2.0 port, one HDMI 2.0 output, one Ethernet port, and one 3.5mm combo audio jack.