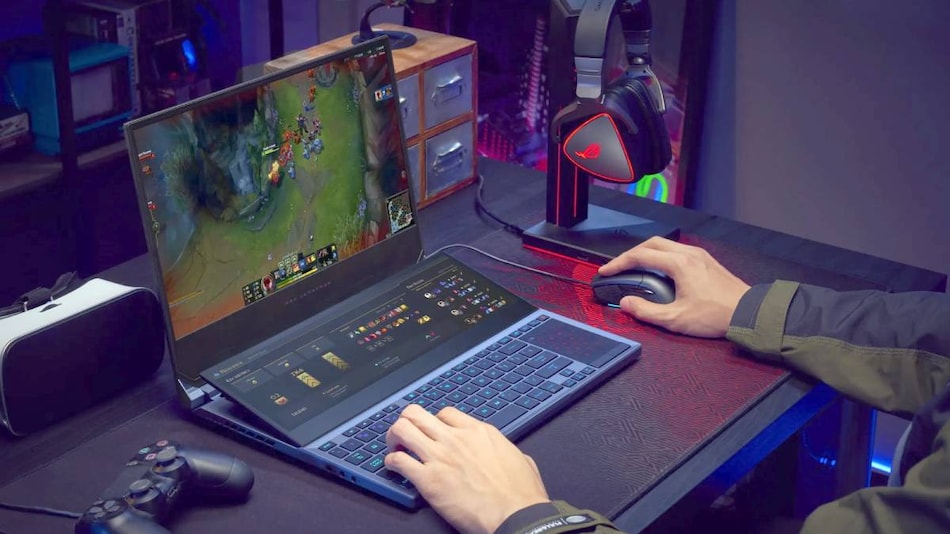 Just as Intel and Nvidia have announced their latest hardware for gaming laptops, Asus has unveiled its brand new dual-screen ROG Zephyrus Duo 15 gaming laptop built around the new Core i9-10980HK CPU and GeForce RTX 2080 Super GPU. The highlight of the new laptop is of course its secondary screen, which Asus says will appeal to gamers and power users who are used to having multiple monitors on the desktop for streaming, chat apps, game guides, and general multitasking. The ROG Zephyrus Duo 15 features an "active aerodynamic" cooling system, an optional 300Hz full-HD screen, and per-key RGB-backlit keyboard.

Similar to the Asus ZenBook Duo series, the new ROG Zephyrus Duo 15 features a secondary ROG ScreenPad Plus screen that runs the full width of the laptop, positioned above the keyboard. The primary display measures 15.6 inches diagonally and you get a choice between 4K 60Hz and full-HD at 300Hz. The secondary screen measures 14 inches and has a resolution of 3840x1100 to match the width of the primary display for easy multitasking.

While the primary screen will not support touch, the secondary one will. Asus has designed a hinge that allows it to be raised at a 13-degree angle, which improves usability and visibility, but also opens up a large intake vent for the cooling system.

Asus says it is collaborating with game and software developers to optimise features such as in-game chats, stats, and guides for the secondary screen and for touch controls. Asus' own software will show CPU and GPU usage among other things. As with the ZenBook Duo, which we have reviewed, you also get quick shortcuts, task groups, and snap guides for easy window arrangement.

The ROG Zephyrus Duo 15 is just 210mm thick and weighs 2.4kg. The cooling system allows for one of Intel's fresh 10th Gen Core i9 or Core i7 CPUs as well as an Nvidia GeForce RTX 2080 Super or GeForce RTX 2070 Super discrete GPU to be implemented in such a compact laptop. Of course Asus promises superb performance for gaming as well as productivity.

There's 16GB of soldered DDR4-3200 RAM with a free SODIMM slot allowing up to 32GB more to be added. Asus will outfit this laptop with dual NVMe M.2 SSDs in RAID 0 for speed. You also get an ESS Sabre DAC for audio, stereo speakers, far-field microphones for voice control, Wi-Fi 6, and Bluetooth 5. The 90Wh battery can be recharged using the bundled 240W charger or any USB Type-C Power Delivery adapter up to 65W when not gaming.

The ROG Zephyrus Duo 15 also features a Thunderbolt 3 port that can fall back to USB 3.2 Gen2 (10Gbps), one more USB 3.2 Gen2 Type-A ports and two Gen1 (5Gbps) ports, HDMI, individual audio jacks, and an Ethernet port. The trackpad is placed to the right of the keyboard and can double as a numeric pad if needed.

Pricing for the ROG Zephyrus Duo 15 are not yet known, but it is set to become available starting in May 2020 in some parts of the world.