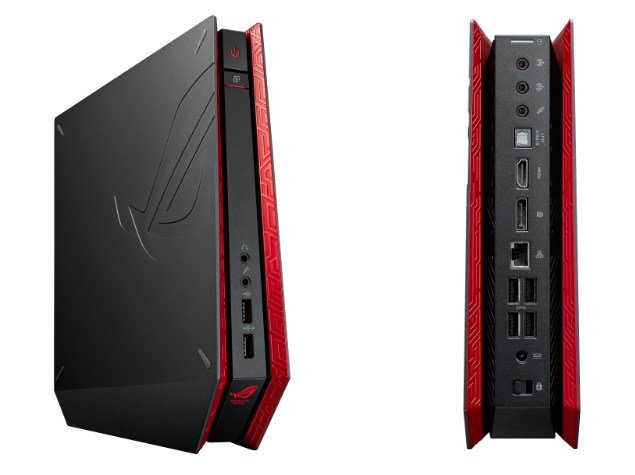 Asus has launched a small-form-factor gaming PC under its Republic of Gamers brand. The device is inspired by gaming consoles which are usually smaller and more versatile than desktop PCs. The GR8 is housed in a 2.5-litre chassis which can be placed in a bedroom or living room as well as carried around to LAN parties.

The Asus ROG GR8 comes in matte black with red accents and a Mayan-inspired pattern design. It has a pulsating illuminated ROG logo. There is a sliding cover for easy access to the RAM slots and drive bay. Asus describes it as quiet at just 28dB when running, and power efficient, consuming less than 15W at idle.

The ROG GR8 uses a mobile dual-core Intel Core i7-4510U CPU running at up to 3.1GHz, and an Nvidia GeForce GTX 750Ti GPU with 2GB of GDDR5 VRAM, which the company says will allow immersive full-HD gaming as well as 4K UHD video. There is 8GB of system RAM, a 128GB SSD to reduce boot and game load times, and a 1TB hard drive for bulk storage. 100GB of Asus Web Storage for one year is also included.

There is a three-year on-site warranty on the whole ROG GR8 system. It is priced at Rs. 82,000 and is customisable as per buyers' needs. It will be available in November.
Comments