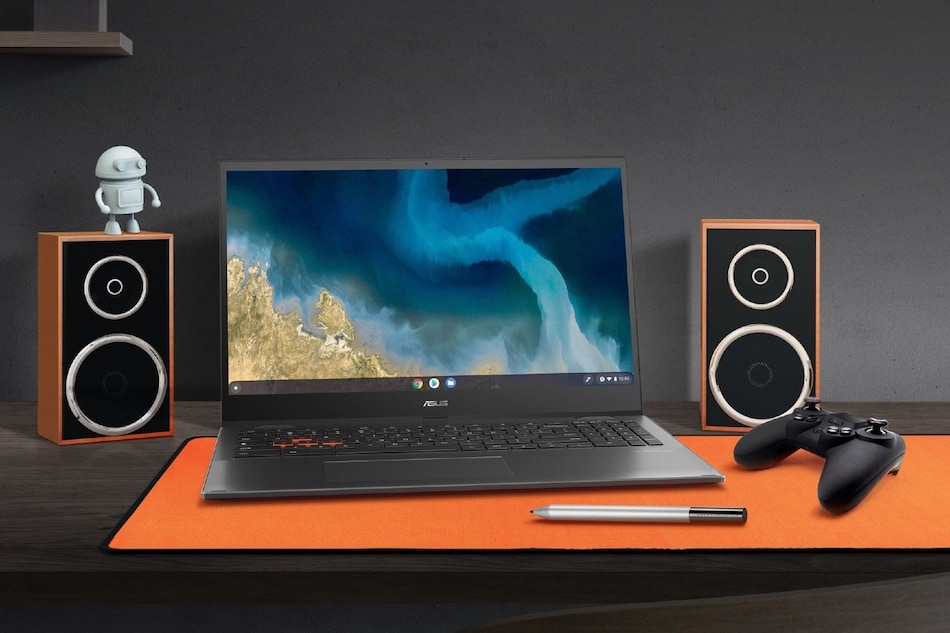 Asus Chromebook Flip CM5 has been launched as the latest Chromebook by the Taiwanese manufacturer. The new Chromebook comes with AMD Ryzen 5 and Ryzen 3 processors and is designed to offer cloud gaming, with support for both Google Stadia and Nvidia GeForce Now. Asus highlighted features such as orange backlighting around the WASD keys and its proprietary Wi-Fi Stabilizer that it hopes will make it stand out for online gamers. The Asus Chromebook Flip CM5 has a 2-in-1 form factor that is backed by a 360-degree hinge so you can fold the keyboard flat and use the display that supports both touch and stylus input.

Asus Chromebook Flip CM5 price starts at $499.99 (roughly Rs. 36,600) for the base variant that has an AMD Ryzen 3 processor, along with 4GB of RAM and 64GB of onboard storage. The Chromebook is available for purchase in the US in a single Mineral Gray colour through channels including Abt and Newegg. However, details about its availability and pricing in other markets are yet to be announced.

The Chromebook Flip CM5 was originally announced by Asus in January. The company at that time, however, did not announce its pricing and availability status.

The Asus Chromebook Flip CM5 features a 15.6-inch full-HD (1,920x1,080 pixels) display that has the company's NanoEdge design and brings 81 percent screen-to-body ratio. The display also delivers 178-degree viewing angles and has Universal Stylus Initiative (USI) 1.0 standard support to work with a range of stylus pens. However, despite being targeted at online gamers, the Chromebook Flip CM5 has the regular 60Hz refresh rate.

Asus has provided the options to choose between AMD Ryzen 3 3250C and AMD Ryzen 5 3500C processors, along with AMD Radeon graphics. The Chromebook also has up to 16GB of DDR4 RAM. Further, customers have the choice to pick the default 64GB eMMC storage or an M.2 NVMe PCIe SSD of either 128GB or 256GB.

The Chromebook comes with Harman/ Kardon audio along with dual stereo speakers. In terms of connectivity, it provides two USB 3.2 Gen 2 Type-C ports with support for DisplayPort and Power Delivery, a USB 3.2 Gen 2 Type-A, and an HDMI 1.4 port. It also comes with Bluetooth v5.0 and Wi-Fi 6.

Asus has provided a backlit chiclet keyboard that has 1.4mm of key travel. The Chromebook Flip CM5 also comes with an HD (720p) webcam.

Similar to other Chromebooks, the Asus Chromebook Flip CM5 has Google Play access for downloading Android apps and games. You can also play casual online games through the preloaded Chrome browser. Further, there is support for Google Stadia and GeForce Now to bring real-time gaming directly from the cloud. You will, of course, not be able to play any top-end games due to hardware constraints and Chrome OS.

The Chromebook Flip CM5 is made of an aluminium-alloy metal lid chassis that comes with an “obsidian velvet” texture and is paired with Asus' proprietary 360-degree ErgoLift hinge that allows users to rotate the display. It also lifts and tilts the keyboard to bring an ergonomic typing experience.

Asus has provided a 57Wh battery on the Chromebook Flip CM5 that is claimed to deliver up to 10 hours of usage on a single charge. Besides, the Chromebook measures 357.6x240.8x18.5mm and weighs 1.95 kilograms.

It's Google I/O time on Orbital, the Gadgets 360 podcast, as we discuss Android 12, Wear OS, and more. Later (starting at 27:29), we jump over to Army of the Dead, Zack Snyder's Netflix zombie heist movie. Orbital is available on Apple Podcasts, Google Podcasts, Spotify, Amazon Music and wherever you get your podcasts.
Affiliate links may be automatically generated - see our ethics statement for details.