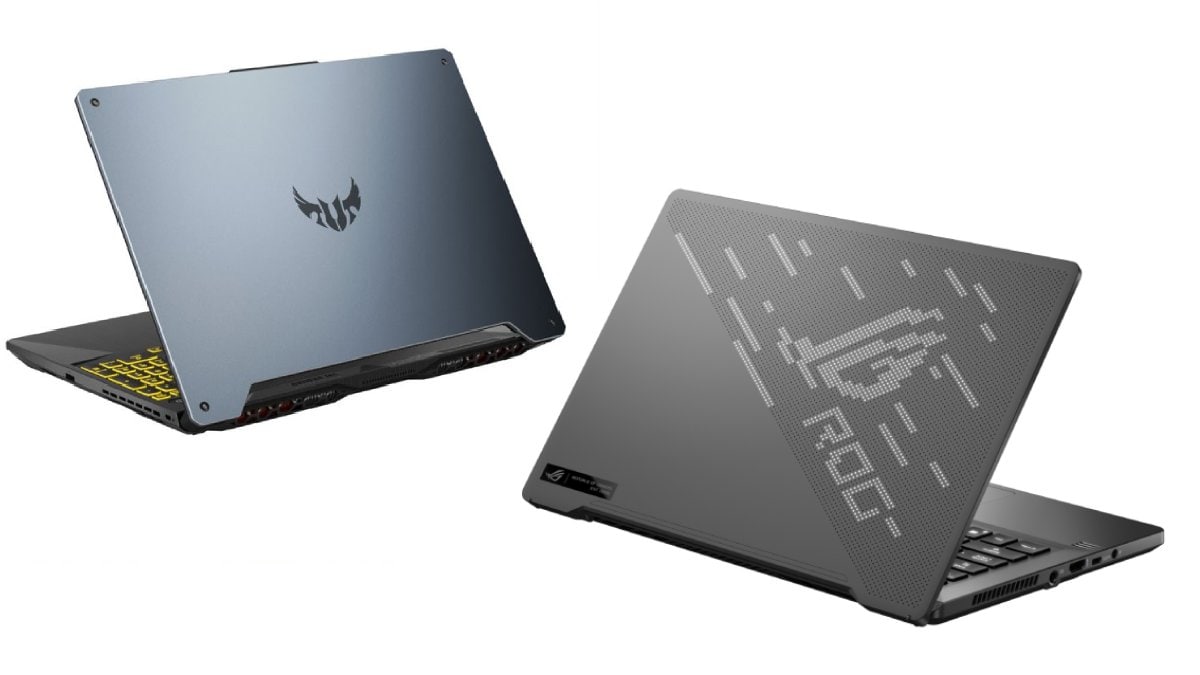 Asus has unveiled its new slim and light ROG Zephyrus G14 gaming laptop and a new series of entry-level models, the TUF Gaming A15 and TUF Gaming A17, to coincide with CES 2020 in Las Vegas. The new laptops feature AMD's just-announced Ryzen Mobile 4000-series processors. The ROG Zephyrus G14 is a premium compact model with an optional new 'AniMe' LED array on its lid which can show various animated effects as well as contextual information. On the other hand, the TUF Gaming A15 and A17 target value-conscious gamers. All models are set to be launched in India by the second quarter of 2020.

Starting with the ROG Zephyrus G14, this model features a new minimalist exterior design that should allow it to fit in anywhere, from classrooms to offices to the home. It is aimed not only at gamers, but also those who need a compact, powerful machine. The laptop is 17.9mm thin (without the optional AniMe lid display) and weighs 1.6kg. It will be available in Moonlight White and Eclipse Grey.

The AniMe feature is a grid of 1,215 individual white mini-LEDs which can be animated with up to 256 levels of brightness. Users can create patterns of their own or import existing animations, and the array can be used to react to events and notifications, as well as to display useful information. This will be available only on certain variants of the ROG Zephyrus G14. Asus says it has balanced the cooling, power, and weight that this will add to the laptop.

Asus also says this is one of the world's first compact laptops to feature Nvidia GeForce RTX graphics and the first to use AMD's Ryzen Mobile 4000-series processors based on the Zen 2 architecture with up to 8 cores and 16 threads. Asus also says it teamed up with AMD to create a special 4000-series Ryzen Mobile processor with a 35W TDP rather than the usual 45W rating, in order to optimise performance, power consumption, and heat.

The company further says it has developed a unique self-cleaning cooling system. The specifications include up to an Nvidia GeForce RTX 2060 GPU, 32GB of RAM and a 1TB SSD. There will be options for a full-HD 120Hz screen as well as a 1440p 60Hz screen, aimed at gamers and content creators respectively. The battery will support USB Type-C power delivery for convenient charging on the go.

The TUF Gaming A15 and A17 will be available with two distinct lid designs, Bonfire Black and Fortress Grey, also aimed at gamers and general-purpose buyers. Both sizes also feature AMD Ryzen Mobile 4000-series processors, though equivalent TUF Gaming F15 and F17 models based on 10th Gen Intel Core CPUs will be launching later. The CPUs will have up to 8 cores and 16 threads, and there will be options with up to Nvidia GeForce RTX 2060 GPUs. The 15-inch model will be available with up to a 144Hz full-HD screen, while the 17-inch model tops out at 120Hz.

Asus touts the physical toughness of this series of laptops, and says they have been designed with easy upgradeability in mind. A flap on the bottom will allow access to two RAM slots and two M.2 PCIe SSD slots. The full-sized keyboard includes a number pad as well as a non-compressed inverted-T arrow cluster.

Pricing has not yet been announced, and Asus says it will bring both series to India within a few months. The exact specifications and options for the models released here will be known at that time. For more details, do check out our first impressions of the ROG Zephyrus G14 and TUF Gaming A15.

Disclosure: Asus sponsored the correspondent's flights to New Delhi for a pre-CES briefing.