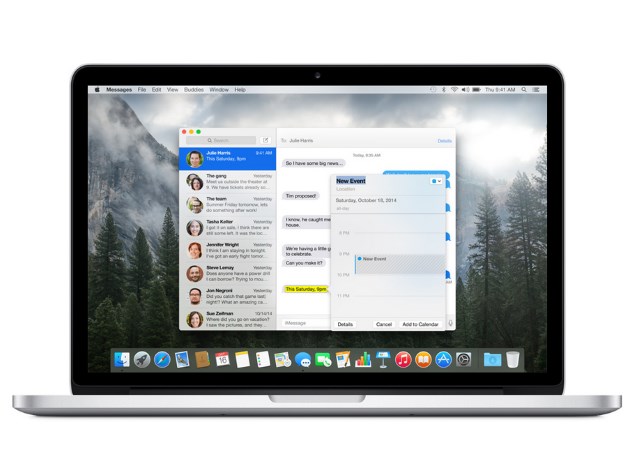 Apple has updated the 15-inch MacBook Pro with Retina Display, adding the Force Touch trackpad that debuted on the new 12-inch Macbook and 13-inch MacBook Pro with Retina Display earlier this year, along with faster SSDs and improved battery life. The 15-inch MacBook Pro with Retina Display was Apple's only portable Mac not to be refreshed at that time. A higher-end option with a discrete AMD Radeon R9 M370X GPU instead of an Nvidia GeForce GTX 970M will also be available.
The Force Touch trackpad uses a vibrating "taptic" feedback motor to simulate a physical click. By pressing down on it with varying degrees of force, users can trigger different actions, such as scrolling faster or triggering contextual actions.
The starting price of the 15-inch MacBook Pro with Retina Display has gone up from Rs. 1,44,900 to Rs. 1,59,900. It still comes with a 2.2GHz quad-core Intel Core i7 processor, 16GB of RAM, a 256GB SSD and integrated Intel Iris Pro graphics. A higher-specced model comes with a 2.5GHz quad-core Core i7 CPU, a 512GB SSD and AMD Radeon R9 M370X graphics, for Rs. 1,99,000 as opposed to Rs. 1,79,900 for the outgoing model. Wi-Fi b/g/n/ac, Bluetooth 4.0 are common to both new models, and Apple also claims 9 hours of battery life for the two new models; up by one hour compared to their predecessors. Both are supposed to be available already at Apple authorised resellers.
The company also launched a new model of the iMac with Retina 5K Display which brings the cost down to Rs. 1,59,000 from Rs. 1,79,000. The new model, which will be available alongside the original, uses a slightly slower CPU and GPU, and also steps down from a hybrid "Fusion Drive" to a standard hard drive.
While the previous model had a 3.5GHz quad-core Intel Core i5 processor and an AMD Radeon R9 M290X GPU, the new one has a base CPU speed of 3.3GHz and uses a Radeon R9 M290 GPU. Apple's Fusion Drive technology combines a hard drive and 128GB of NAND flash storage into a single logical volume and dynamically manages which files are stored on which device, to help speed up booting launching often-used programs.
The new iMac with Retina 5K Display has the same 27-inch 5120x2880-pixel screen as its predecessor, which Apple says is 67 percent more screen area than a 4K display. It comes with 8GB of RAM which can be upgraded by the user. Both models come with four USB 3.0 ports and two Thunderbolt 2.0 ports, a Mini-DisplayPort output, a Gigabit Ethernet port, Wi-Fi b/g/n/ac, Bluetooth 4.0, and an SDXC card reader.
As before, users can customise their iMacs at the time of purchase with faster processors, larger hard drives, or SSDs. Apple says the new iMac with 5K Retina Display is already available in India at authorised resellers.
Comments

How to Use Your Xbox One Controller With a PC
Apple, Google, Others Urge Obama to Reject Policies That Weaken Encryption