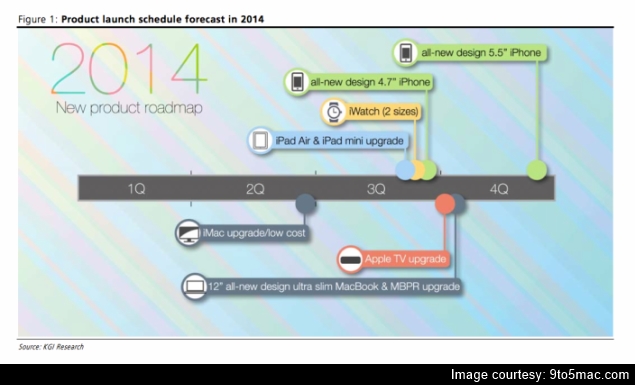 After multiple leaks detailing various features of Apple's upcoming mobile and desktop OS updates, it's time for some hardware rumours. Taiwan-based KGI Securities analyst Ming-Chu Kuo, who has published accurate research reports about Apple's component sourcing activities in the past, has predicted a timeline of updates to nearly every Apple product by the end of 2014.

According to Kuo, Apple will have two new devices ready to show off at the company's annual World Wide Developers' Conference; a new, slimmer 12-inch MacBook, and a more affordable iMac. While the new MacBook model won't be ready to launch till later this year, the iMac could be available immediately. MacRumors and 9to5Mac have obtained the KGI report and published summaries.

The new, thinner MacBook (which might or might not be called MacBook Air) will have a Retina-class display similar to Apple's higher-end MacBook Pro lineup, and will come with even fewer ports for peripherals and expansion. It could be as light as the current 11-inch MacBook Air, but would feel more productive. Furthermore, according to Kuo, Apple will ditch its clickable trackpad in favour of a slimmer version with no moving parts. It would use a low-power Intel CPU, and might even be able to run without a fan.

On the desktop front, a new, cheaper iMac model could return to polycarbonate instead of metal construction. Apple's most recent iMac models, which have a dramatically slim aluminium chassis, have been criticised for being more expensive than previous models, and also less upgradeable. Apple has also stuck with large, expensive LCD panels while competitors have made inroads into the all-in-one PC market with cheaper mass-market models.

Apple also does not currently offer older or lower-powered iMacs at a discount to students, teachers and educational institutions, as it has in the past. A new low-cost iMac would have a strong appeal in this market.

Previous reports have indicated that Apple will stick to its annual cycle of iPhone and iPad refreshes, but that this year will see the launch of two iPhone models, both with larger screens. Kuo expects a 4.7-inch model to be ready by September or October 2014, while production delays will push availability of an even larger 5.5-inch model into December, but hopefully still in time for the holiday season. The models will have different screen resolutions, but both will have 1GB of RAM, NFC, and Touch ID, but will stick with 8-megapixel cameras.

Apple could also launch its long-rumoured "iWatch" wearable product in two different sizes alongside the new iPhones. These could tie into the Healthbook app, providing constant monitoring of vital signs and other data such as sleep rhythm and physical activity. The devices would have small AMOLED screens, NFC, Touch ID or other biometric sensors, and sapphire glass lenses.

The iPad Air and iPad mini would receive more modest updates, including new Apple A8 processors and Touch ID sensors. Kuo adds that a larger model with a 12.9-inch screen is under development, but will not launch before the end of 2014.

Apple will unveil iOS 8, including Healthbook, improved maps, and new apps alongside OS X v10.10 at its annual developers' conference, to be held this June in San Francisco.