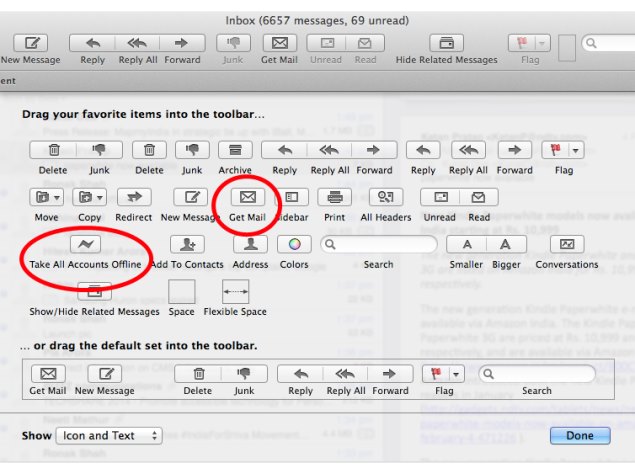 There's good news and bad news for users of Apple's Mail app who have been plagued by problems since updating to OS X Mavericks. Apple has acknowledged that users are still having trouble despite multiple updates since a new version of Mail first released with the updated operating system, but the suggested fix is only a temporary workaround.

Apple suggests that users disconnect and reconnect from their mail servers by selecting 'Take All Accounts Offline' and then clicking 'Get All New Mail' from the Mailbox menu. This has the same effect as quitting and restarting the app, which is what many users had resorted to doing. Apple also helpfully adds that these two commands can be added to Mail's main toolbar by clicking 'View > Customize Toolbar' and then dragging them from the palette that pops up to the desired position.

The workaround does not fix the underlying problem, although Apple's acknowledgment means they know it exists and are hopefully working on it already.

Since the release of Mavericks, also known as OS X v10.9, users have complained that the Mail app refuses to download new emails and that they have trouble while moving and deleting messages, especially when connected to Gmail accounts. Such problems relate to the desktop software's inability to synchronise changes with remote mail servers.

Two previous updates, including a dedicated Mail Update and the overall Mavericks 10.9.1 release failed to fix these problems for many users. Apple's release notes for 10.9.1 specifically mention improved support for Gmail, reliability fixes, and improved search and mailbox functionality.

Other problems relate to mail being delivered late, folders and tags not updating, and searches not displaying messages that are known to exist.