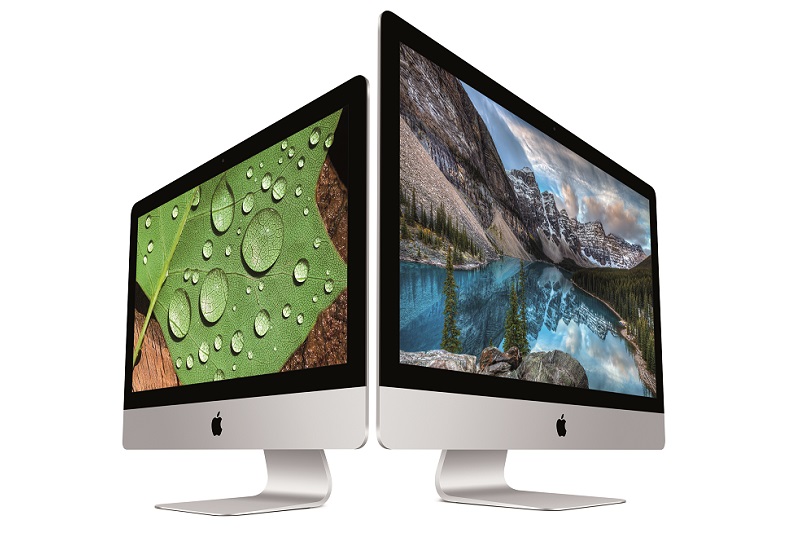 Apple has quietly launched a new 21.5-inch iMac with a 4K screen and a refreshed 27-inch iMac model along with a new range of input devices. The smaller iMac seems like an inevitable update to the product line, following leaks earlier this month and the discovery of code in Apple's recently launched OS X El Capitan update.

The new 21.5-inch iMac's screen has a resolution of 4096x2304 pixels, which is slightly larger than the conventional 3840x2160 standard also used for UHD TVs. That gives it the same pixel density as the 27-inch 5K iMac. Apple is also touting a wider P3 colour gamut than the previous sRGB offering. The CPU is listed as a quad-core 3.1GHz Intel Core i5 with integrated Iris Pro 6200 graphics, which reveals it to be a fifth-generation Broadwell model. The Iris Pro designation indicates that the integrated graphics logic has a dedicated 128MB eDRAM cache which perhaps gives it enough muscle that a dedicated GPU is not required.

There's also 8GB of DDR3 RAM and a 1TB hard drive. Prices start at $1,499 though buyers can also upgrade to a faster 3.3GHz Core i7 processor, 16GB of RAM, a larger Fusion Drive or smaller SSD.

Apple is also offering refreshed non-retina models with the same 1920x1080-pixel screens but new fifth-generation Core i5 processors. The lowest priced model still starts at $1,099 while another model at $1,299 offers a faster CPU and graphics. All models also have two Thunderbolt 2 ports.

The 27-inch Retina 5K iMac range has also been updated with Broadwell CPUs, and non-retina 27-inch models have notably been discontinued. The range now starts at $1,799 for a model with a 3.2GHz quad-core Intel i5 processor, AMD Radeon R9 M380 GPU, 8GB of DDR3 RAM, and a 1TB hard drive. Stepping up to $1,999, there's a model with an AMD Radeon R9 M390 GPU and 1TB fusion drive, with all other specifications remaining the same. The top-end $2,299 model now has a 3.3GHz Core i5 processor with a 2TB Fusion Drive and AMD Radeon R9 M395 graphics but still only 8GB of RAM unless you customise your order.

Apple also slipped new input devices in with its announcement. The new trio feature built-in batteries that can be recharged using a Lightning cable. The Magic Keyboard has been designed with a solid base and uses the new scissor keys and slightly altered layout introduced with the 12-inch MacBook. The new Magic Trackpad 2 has a 29-percent larger surface area and supports Force Touch gestures, which Apple has rolled out across much of its MacBook range. The company claims "about a month of more" of battery life for the keyboard and trackpad, though the mouse's listing makes no such promise.