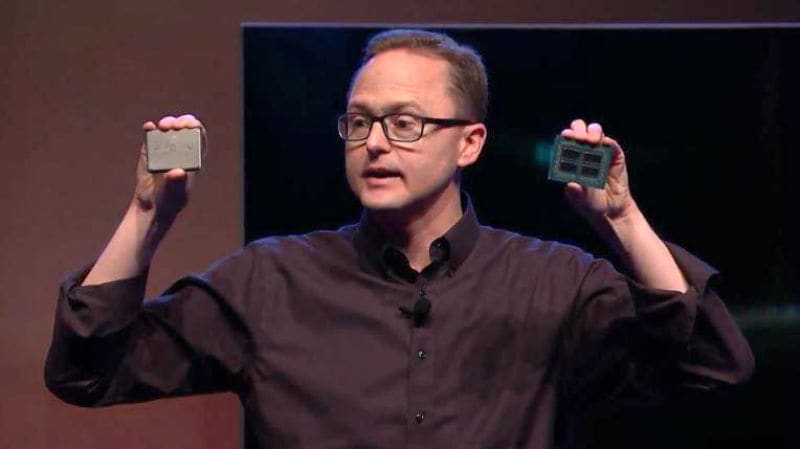 At its annual Computex press event in Taipei today, AMD announced that it will launch 32-core and 24-core models in its second-generation Threadripper CPU lineup later this year. The upcoming processors will use the Zen+ architecture refresh that underpins AMD's second-generation Ryzen CPU lineup, and will also be manufactured using the same 12nm process. The move comes just a day after Intel announced an unnamed 28-core desktop processor for later this year. Interestingly, Intel pipped AMD at last year's Computex, announcing its 18-core Core i9-7980X against AMD's 16-core Threadripper 1950X.

No further details or specifications of the new enthusiast processors were announced, but AMD did state that both processors would use the same socket and work with the same motherboards as current-generation Threadrippers. AMD also showed a demonstration of the 24-core model handily defeating Intel's current flagship Core i9 in a Blender 3D rendering benchmark. The two processors, and potentially others in the series, will be launched beginning in Q3 2018.

AMD also showed off a Nano version of its Radeon Vega56 graphics card for small-form-factor PCs, manufactured by PowerColor. In lieu of any other consumer gaming announcements, AMD recapped the availability of FreeSync on Samsung QLED TVs as well as the Microsoft Xbox One S and Xbox One X.

There was no news of next-generation Radeon GPUs for gaming, but the company did show off a new Radeon Instinct compute accelerator for servers and workstations, fabricated using a brand new 7nm manufacturing process. It will launch in the second half of 2018, and consumer GPUs might benefit from the architecture and process technology in 2019. The next-generation Epyc processor will also use the 7nm process, and is currently undergoing validation before being sampled to customers later this year and going on sale in 2019.