The Lenovo ThinkStation P620 will be the first professional workstation based on Ryzen Threadripper Pro. 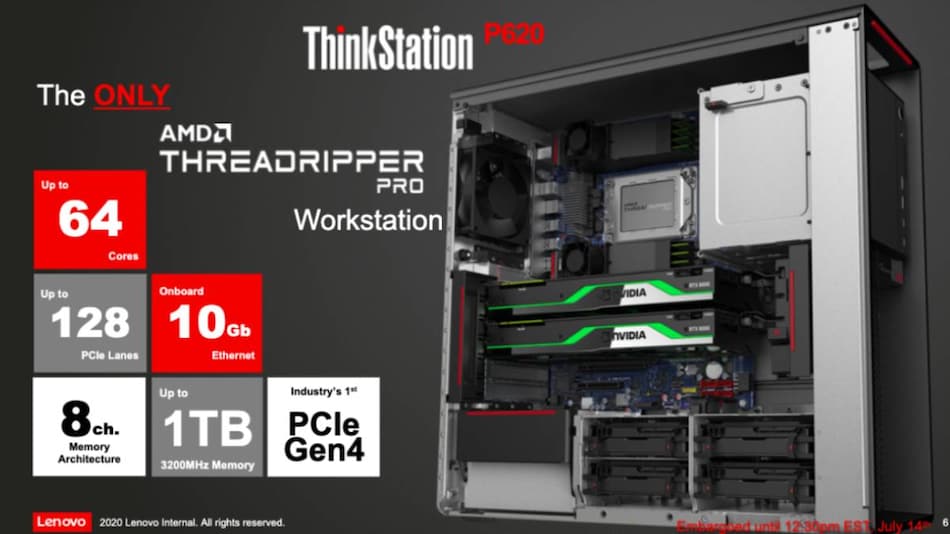 AMD has announced its new Ryzen Threadripper Pro CPU series for high-end desktop workstations designed for use in managed environments. These processors will be targeted at extremely demanding workloads such as pro content creation, 8K video and CGI workflows, massive-scale data visualisation, fluid dynamics, engineering, and AI. Target industries include media and entertainment, oil and gas, aerospace and automotive design, software and game development, and many more. AMD says that a lot of people in these industries are taking advantage of the high core counts and platform bandwidth of enthusiast Ryzen Threadripper CPUs but need the security, manageability, and stability of a professional platform, plus the support of top-tier OEMs and system integrators.

Similar to the existing Ryzen Threadripper 3000 series, these processors are based on the Zen 2 core architecture. There are four new models, with the top-end one offering 64 cores and 128 threads. With the Ryzen Threadripper Pro series, AMD has for the first time upped the memory support to 2TB of DDR4-3200 ECC RAM across eight channels, and the platform bandwidth to 128 lanes of PCIe 4.0.

AMD has partnered with Lenovo to launch the ThinkStation P620, which will be the first offering based on Ryzen Threadripper Pro CPUs when it begins shipping in late September this year. Prices have not yet been announced, but the ThinkStation P620 can be configured with up to a 64-core Ryzen Threadripper Pro 3995WX CPU, two Nvidia Quadro RTX 8000 GPUs or four Quadro RTX 4000 GPUs, 1TB of RAM, and 20TB of storage across eight PCIe and SATA drives.

The workstation also features integrated 10Gb Ethernet, a custom-designed air cooling solution including active RAM cooling, and USB 3.2 Gen2 connectivity. Operating system choices include Windows 10 Pro and Ubuntu Linux, and Lenovo plans to certify additional Linux distributions over time. Thunderbolt is missing from the launch lineup, but Lenovo has stated that it could be added as a feature in the future.

Lenovo will include its ThinkStation Diagnostics and ThinkShield Security Suite to make deployment and management easier in enterprise IT environments. AMD's Pro CPUs are also differentiated from consumer equivalents by their support for Trusted Platform Module hardware for secure booting, real-time memory encryption, secure virtualisation, Windows imaging, and remote management. AMD has committed to 18 months of software support and 24 months of hardware availability to guarantee continuity for business customers.

There are four CPUs in the new series: at the base level, the 12-core, 24-thread Ryzen Threadripper Pro 3945WX is aimed at lightly threaded workloads that benefit from a high clock speed, and it has base and boost speeds of 4GHz and 4.3GHz respectively plus a combined 70MB of cache memory. AMD points out that some professional software is licensed per core, making this a cost-effective option.

Moving up the line, the Ryzen Threadripper Pro 3955WX, 3975WX and 3995WX offer 16,32, and 64 cores respectively, all with multi-threading for twice the number of threads. The flagship Ryzen Threadripper Pro 3995WX has base and boost speeds of 2.7GHz and 4.2GHz respectively, with 288MB of total cache memory. All four CPU SKUs have 280W rated TDPs, and all four support 128 PCIe 4.0 lanes as well as up to 2TB of ECC RAM.

These processors will take on Intel's Core X-series as well as Xeon HEDT and workstation CPU lines, and AMD touts around a significant performance advantage of around 20 percent on average with its 64-core Ryzen Threadripper Pro 3995WX over even a dual-socket workstation with two 28-core Intel Xeon Platinum CPUs.