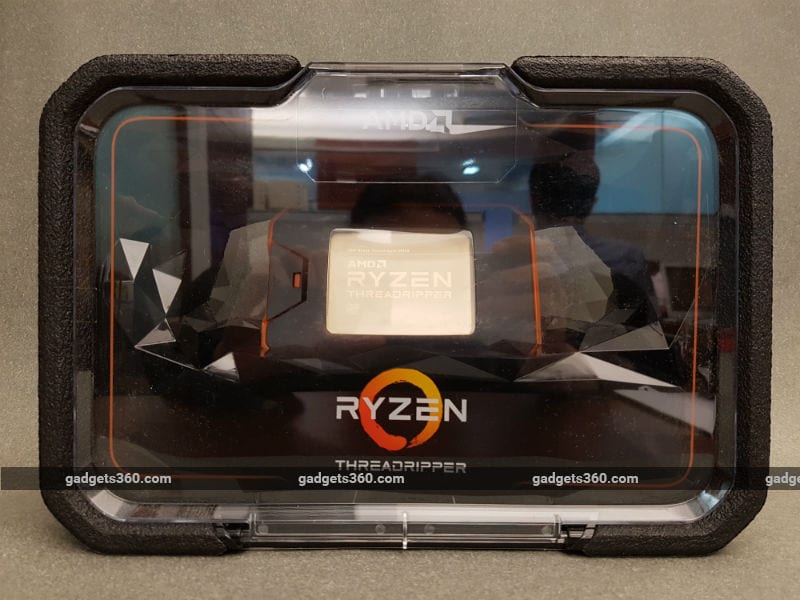 After announcing a 32-core monster CPU at Computex earlier this year, AMD has disclosed the full details of its second-generation Ryzen Threadripper CPU line for high-end desktop users. There will be four new CPUs, split into two lines. The Ryzen Threadripper X-series is aimed at "gamers and enthusiasts", and includes 12-core and 16-core models which directly replace last year's original Threadripper products. The new WX-series consists of a 24-core and a 32-core model, and will target "creators and innovators" who the company says can benefit from much higher parallelism.

The flagship 32-core, 64-thread AMD Ryzen Threadripper 2990WX has been priced at Rs. 1,25,990 plus taxes in India ($1,799 in the USA). Pre-sales will begin from today, and the CPU will officially go on sale on August 13. It runs at a base speed of 3GHz and a boost speed of 4.2GHz. It has 64MB of cache and supports 64 PCIe Gen 3 lanes, with a rated TDP of 250W. While AMD admits that not all software can scale to 64 threads, content creation tools do respond well. The company claims a 51 percent performance improvement in Cinebench R15 with all threads enabled, compared to Intel's top-end Core i9-7980XE (although single-threaded performance is five percent lower).

At a pre-launch briefing for media, AMD demonstrated the Ryzen Threadripper 2990WX overclocked to 5.1GHz using liquid Nitrogen. The company claims that it managed to set a new world record for single-socket CPUS in Cinebench R15, with a score of 7,618.

AMD also supports its Precision Boost 2 and eXtended Frequency Range 2 features on all second-gen Ryzen CPUs, allowing for smooth frequency curves and higher clock speeds across all cores, when thermal and power conditions allow for it. A new feature in AMD's Ryzen Master software is Precision Boost Overdrive, which is an overclocking mode that still allows for clock speeds to be pushed without disabling AMD's regulatory mechanisms which was previously required when overclocking.

Second-gen Threadripper CPUs are fully compatible with existing motherboards based on the AMD X399 platform controller and TR4 socket. The company emphasises that it is committed to giving customers easy upgrade paths, and so even the 32-core model can slot right into the same motherboards that users might have purchased last year, following a BIOS update. While MSI and Gigabyte will be launching new models anyway, Asus has released a VRM cooling kit for existing models to help overclocking performance.

AMD has also teamed up with Cooler Master on a new Wraithripper air cooler which will support all four new processors. It has been designed by Cooler Master but will carry AMD's Threadripper logo. It features seven copper heatpipes, a 120mm fan sandwiched between two columns of aluminium fins, RGB LEDs and weighs 1.6kg. It has been designed to accommodate tall RAM DIMMs, but high-end users, especially those who want to overclock their systems, will most likely choose a liquid cooling solution. The Wraithripper will not be included with Threadripper CPUs, and will be sold by Cooler Master. A price has not yet been announced.