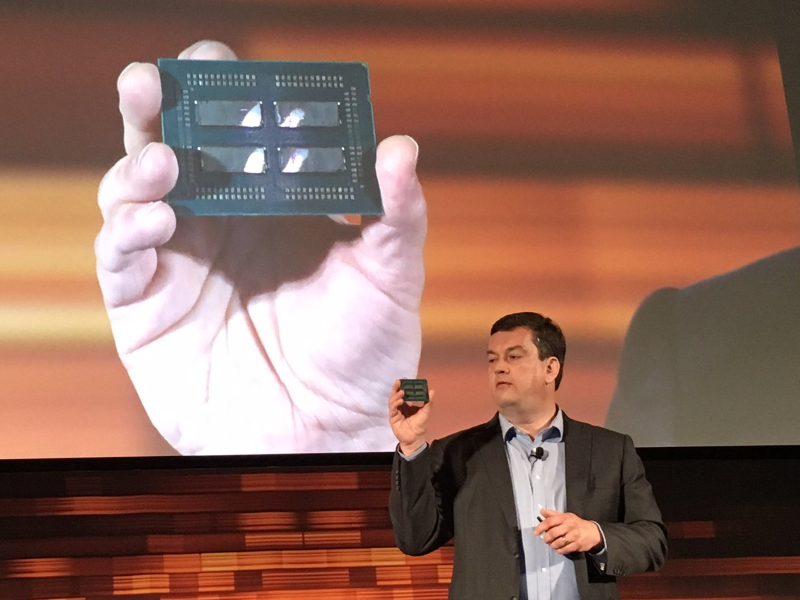 AMD made a number of huge announcements at its annual Financial Analyst Day gathering on Wednesday, involving products across its CPU and GPU businesses. Many of the announcements confirm rumours and speculation that have circulated for months. AMD might have decided to go public with them ahead of the annual Computex trade show in order to generate buzz before Intel unveils its own high-performance hardware.

Starting with the desktop, AMD CEO Dr Lisa Su confirmed that the company will launch 16-core/32-thread high-end desktop processors. Details are scarce, but the name currently being used is Ryzen Threadripper. These will be the first such CPUs in the world, and will target extreme PC enthusiasts and those whose workloads involve massively parallel tasks such as content creation. Video editing, transcoding and gaming while streaming were specifically named as target workloads.

There's no confirmation of the number of models or variants, much less pricing, though if the performance of the Ryzen 7 (Review) is any indication, AMD could try to undercut Intel severely. There is no precedent for a 16-core desktop CPU, but Intel is likely to announce a 12-core model at Computex priced lower than its current top-end Core i7-6950X (Review) which was launched at Rs. 1,69,000. Threadripper will also likely require a new server-class platform when it debuts in "summer 2017". Mainstream Ryzen CPUs will begin appearing inside prebuilt PCs from Dell, HP, Lenovo, Acer and Asus this quarter.

Next up is the announcement of Epyc, AMD's Zen-based server product formerly codenamed Naples. AMD values the server CPU market at $16 billion. Epyc processors will have up to 32 cores and 64 threads, and will be capable of running in dual-socket configurations for double the processing power in a single server. Up to 4TB of RAM is supported on a dual-CPU motherboard, with eight channels per CPU. AMD is also touting better PCIe bandwidth than Intel and the ability to pair more GPUs, specifically AMD's own Vega GPUs. These processors will launch as soon as June 2017.

Speaking of Vega, the first graphics card to feature AMD's next-gen technology will be called the AMD Radeon Vega Frontier Edition, and it will be available for purchase by the end of Q2 2017. Aimed at the professional market, the Frontier Edition card is touted to be capable of 25TFlops of FP16 performance and 13TFlops at FP32. It will have 16GB of high-bandwidth memory and 4,096 processing units divided into 64 clusters. It will be aimed at workloads involving neural networks, deep learning, real-time visualisation, VR, multimedia post-production, and game development.

Later this year and into early 2018, AMD will release Ryzen Pro and Ryzen Mobile processors for business machines and portables respectively. Ryzen Pro will be marketed at customers for whom security and manageability are important, and these will likely be very similar to existing Ryzen CPUs. Ryzen Mobile promises versatility and power efficiency, and will show up in a variety of laptops ranging from 2-in-1s to ultraportables to gaming machines.

On the manufacturing technology front, AMD will roll out current-gen products on the existing 14nm process and a 14nm+ refresh, before it moves to a 7nm manufacturing process with Zen 2 and then 7nm+ with Zen 3. While detailed timelines were not disclosed, AMD said that it expects Zen 3 to ship in 2020.