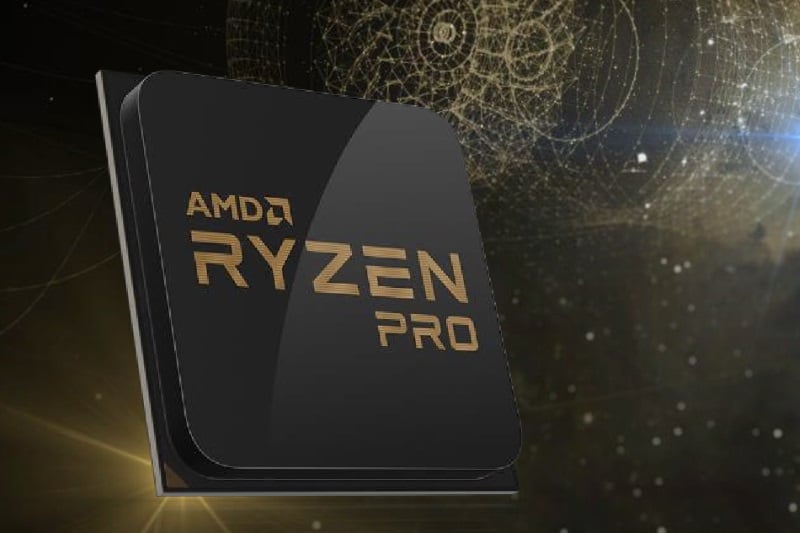 AMD has announced that its Ryzen Pro CPUs for enterprise and corporate desktops will launch on August 29. There will be six models in all - two each under the Ryzen 7 Pro, Ryzen 5 Pro and Ryzen 3 Pro brands. AMD promises a number of features that distinguish Ryzen Pro CPUs from regular commercial Ryzen ones, and also claims to match or exceed Intel's current-generation offerings in many ways.

Ryzen Pro CPUs use the same basic architecture as their Ryzen counterparts, but are enhanced for reliability and security. Each CPU has a dedicated hardware co-processor on the same package, which the company says is superior to having a secure module on the motherboard, as it reduces opportunities for malware and attackers to get to the CPU. When powering up a computer, the co-processor holds the CPU cores in a suspended state until it can verify the integrity of the BIOS and other hardware. The normal boot process begins only after the hardware root of trust has authorised it.

Ryzen Pro CPUS also have dedicated logic blocks for encryption and decryption, reducing the workload on the CPU cores. Data can be encrypted using AES as it is sent form the CPU to system memory, and decrypted as it comes in the opposite direction. This happens on-the-fly and is completely transparent to the OS and applications, meaning that even legacy software can be run in a more secure environment.

AMD's OEM partners can design custom systems that take advantage of hardware-based security for specific applications. As an example, future CPUs with integrated graphics will feature DRM support implemented through this secure enclave. AMD says that security is even built into the manufacturing process, with additional checks and tests performed on CPUs right as they leave the production line, to ensure their integrity.

AMD will commit to making Ryzen Pro CPUs available for two years, and that the platform will remain unchanged for at least 18 months in order to simplify and reduce costs associated with large-scale deployment and management. Ryzen Pro will work with the DASH standard for bulk remote manageability, which is cross-platform and non-proprietary. Finally, Ryzen Pro CPUs will have a three-year warranty, compared to one-year for consumer Ryzen CPUs.

The company stresses that while Intel restricts manageability features to its more expensive Core i5 and i7 CPUs, it will make the full range of features available across its entire stack. The idea is that users who don't need much raw compute power shouldn't have to sacrifice security, and companies shouldn't have to spend more on capabilities their workers don't need. Ryzen 7 Pro is aimed at heavy multitaskers and content creators who work with 3D graphics, software development and scientific data. Ryzen 5 Pro targets "advanced productivity" and remote collaboration, while Ryzen 3 Pro is suitable for those who work with documents, surf the Web, and use common productivity applications.

This is also the first look we've had at what AMD has planned for its consumer Ryzen 3 lineup, which is yet to be released. These models lack multi-threading, but could still pose a significant threat to Intel's dual-core Core i3 models. However, all current Ryzen CPUs lack integrated graphics, which means that Intel still has a major cost and complexity advantage for users who don't need a discrete graphics card.

Along with all the Pro-specific features, these new CPUs will benefit from all the same features as the consumer Ryzen lineup, including fine-grained frequency control, advanced sensors embedded within the fabric to control heat and power consumption, and the 52 percent generational leap that the Zen architecture represents over previous AMD products.

Further details regarding specific OEM partners and customised solutions will be announced on August 29 at the formal Ryzen Pro launch.