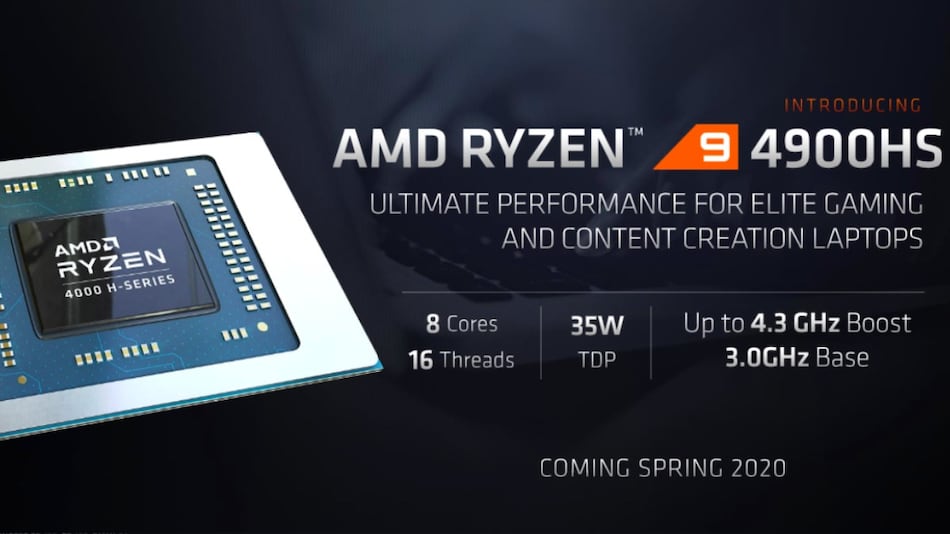 AMD talked a little about its upcoming 4000-series Ryzen Mobile laptop processors at its CES 2020 keynote in January this year. The lineup has now been detailed, and two new halo products, the Ryzen 9 4900H and Ryzen 9 4900HS for gaming laptops have been announced. The company will be looking to boost its presence in the laptop market which has been dominated by Intel for over a decade now. Although the company has been successful in the desktop and enthusiast markets with its recent Ryzen processors, AMD is still largely perceived as the budget option for low-end laptops. Now, the company wants to "reset the gaming notebook market with an all-new level of performance" with the Ryzen Mobile 4000 series.

The company had earlier announced that the Ryzen Mobile 4000 series would include Ryzen 5, and Ryzen 7 models, but now two new flagship CPUs, the Ryzen 9 4900H and Ryzen 4900HS have been announced. These are both 8-core, 16-thread models with slightly improved integrated graphics capabilities compared to the Ryzen 7 models that sit just below them.

The Ryzen 9 4900H has base and turbo speeds of 3.3GHz and 4.4GHz respectively, and a 45W TDP rating. The Ryzen 9 4900HS on the other hand runs between 3GHz and 4.3GHz and is meant to be optimised for power consumption and thermal dissipation. This option has a 35W TDP and will only be available in laptops that are developed by OEMs in close cooperation with AMD, such as the AMD ROG Zephyrus 14 which we got a sneak preview of prior to CES.

The rest of the lineup includes the 45W Ryzen 7 4800H and Ryzen 5 4600H, both of which also have equivalent 35W -HS options. The Ryzen 7 models also have 8 cores and 16 threads, while the Ryzen 5 ones have 6 cores and 12 threads. Graphics capabilities range from six to eight cores.

The H-series processors will address the gaming and high-performance laptop markets, and will be positioned above the U-series models for mainstream laptops. AMD has announced five models across the Ryzen 3, Ryzen 5, and Ryzen 7 tiers, all of which have 15W TDP ratings and feature between five and eight graphics cores.

The Ryzen Mobile 4000 series, codenamed 'Renoir', is being billed as the world's first 7nm X86 CPU lineup. They will be using the same 'Zen 2' CPU core architecture as current 3000-series Ryzen desktop processors, but with a focus on power management.

All models are classified as APUs, which means they have integrated graphics capabilities which leverage AMD's Radeon Vega graphics hardware. The company has decided to go with PCIe 3.0 compatibility rather than PCIe 4.0, and will support LPDDR4X RAM in the interest of battery life. The APUs will be able to power two 4K external monitors using DisplayPort over USB Type-C.

A new feature called SmartShift will leverage AMD's Infinity Fabric interconnect to allow laptops to dynamically balance power and heat between the APU and a discrete AMD GPU at the overall platform level, to squeeze out more performance in situations that call for either one to be prioritised over the other.

AMD has so far chalked up design wins from major manufacturers. The company says over 100 models featuring its latest processors are expected to be launched this year. The first laptops featuring the Ryzen Mobile 4000 series are expected to be launched in Spring 2020. Some of the models that AMD highlighted in particular are the upcoming Dell G5 SE and Lenovo Yoga Slim 7.