The highly anticipated products give AMD a major boost in the high-performance PC gaming space. 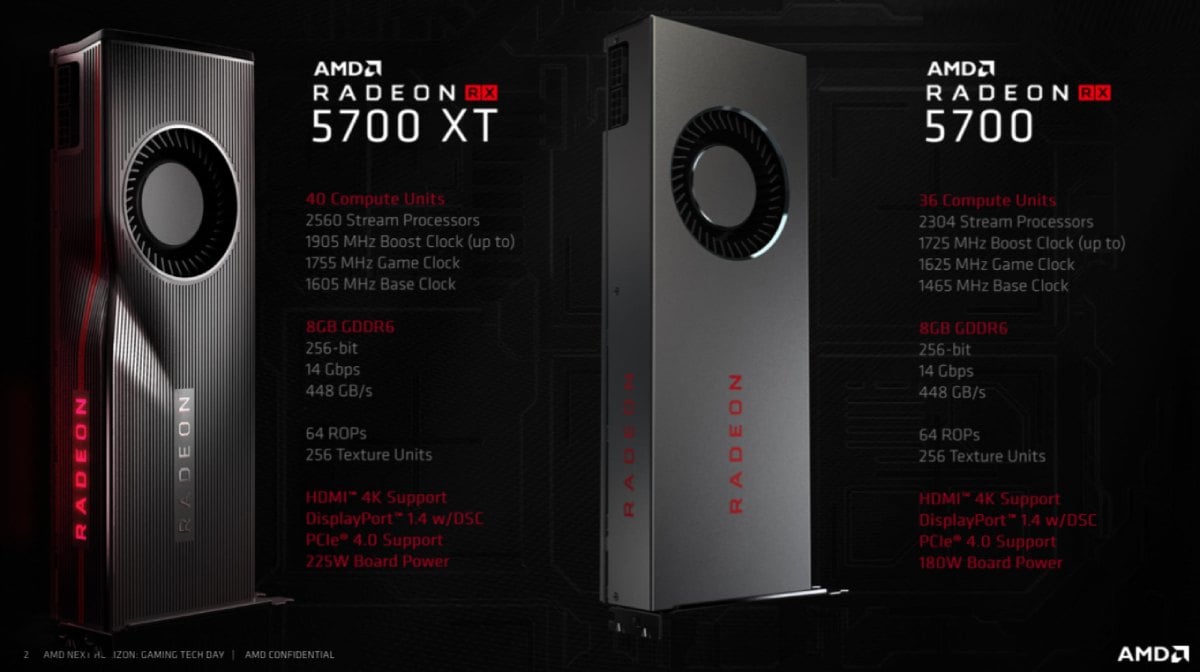 AMD has just made its Radeon RX 5700 series graphics processors official, launching the Radeon RX 5700 XT and Radeon RX 5700 GPUs. These two models are the first consumer GPUs based on the new Navi architecture, which has been in the works for several years now. In addition, AMD has announced a previously rumoured 16-core consumer desktop CPU, the Ryzen 9 3950X, and also two new Ryzen 3000-series APUs with integrated graphics capabilities. AMD President and CEO Dr Lisa Su, joined by multiple senior company executives, announced the new GPUs and CPUs at AMD's Next Horizon Gaming event at the E3 2019 gaming industry expo in Los Angeles.

Both models will feature HDMI 2.0b and DisplayPort 1.4 HDR video outputs with Display Stream Compression, capable of driving 4K at 240Hz, 4K HDR at 120Hz, or 8K HDR at 60Hz with a single cable. The Radeon Media Engine supports H.264, H.265 and VP9 video encoding for efficient streaming to Twitch or YouTube while gaming.

New FidelityFX, Radeon Image Sharpening, and Radeon Anti-Lag tools have also been announced, and promise to make games look better with minimal impact on performance. Image Sharpening uses contrast-adaptive sharpening with optional upscaling and is supported by thousands of old and new games, according to AMD.

Beyond the GPUs announced at the event, AMD also provided a roadmap update, with RDNA2 planned to be released in or before 2021.

The Ryzen 3000 desktop CPU series is based on the Zen 2 microarchitecture and leverages a ‘chiplet' design that splits the CPU cores into separate modular dies, fabricated on a 7nm process and connected via AMD's Infinity Fabric to a common IO die on the same package. AMD claims a 15 percent improvement in instructions per clock with Zen 2 compared to the first-generation Zen architecture.

More details of the Zen 2 architecture have emerged. The L3 cache size has been doubled, reducing memory latency. AMD's Infinity Fabric interconnect has been updated and is now in its second generation. Floating point performance has been doubled, and AVX-256 instructions are supported. AMD says that 60 percent of Zen 2's performance improvements come from its design, while 40 percent comes from the efficient 7nm manufacturing process.

With the X570 chipset platform, Zen 2 CPUs will be able to drive up to 12 USB 3.1 Gen2 (10Gbps) ports, 16 PCIe 4.0 lanes for GPUs and up to 12 general purpose PCIe 4.0 lanes which could be used for three NVMe SSDs, for example. Moreover, all 3000-series Ryzen 7 and Ryzen 9 models will ship with the AMD Wraith Prism RGB LED cooler for free, which is added value.

AMD also announced that the Windows 10 May 2019 Update, which is currently rolling out to users around the world, introduces scheduler optimisations for Ryzen CPUs based on the Zen 2 architecture, with more efficient assignment of threads to individual CPU cores and faster clock speed ramping.

The Ryzen 3000 series will also include the Ryzen 3 3200G and Ryzen 5 3400G APUs, based on the previous Zen+ architecture, with integrated Radeon Vega graphics. The Ryzen 3 3200G features four cores without multi-threading, a Vega 8 GPU, base and boost speeds of 3.6GHz and 4GHz respectively, and a 65W TDP. The Ryzen 5 3400G also has four cores but does support multi-threading. It features Vega 11 graphics and runs at between 3.7GHz and 4.2GHz with the same 65W TDP.

AMD is positioning its new Navi-based GPUs and Ryzen 3000 CPUs, along with the X570 desktop chipset announced at Computex 2019 two weeks ago, as the ultimate high-performance PC gaming platform. All these components support the new PCIe 4.0 standard which doubles the theoretical bandwidth of current-gen PCIe 3.0 while remaining fully backward compatible. AMD touts the speed improvements possible with PCIe 4.0 SSDs, such as Gigabyte's Aorus NVMe Gen4 SSD.

iOS 13 Will Tell You Where Apps Tracked You in the Background, Multi-Cam Support Coming to Latest iPhone and iPad Devices
Huawei Says Goal to Be World's Top Phone Maker Some Time Off