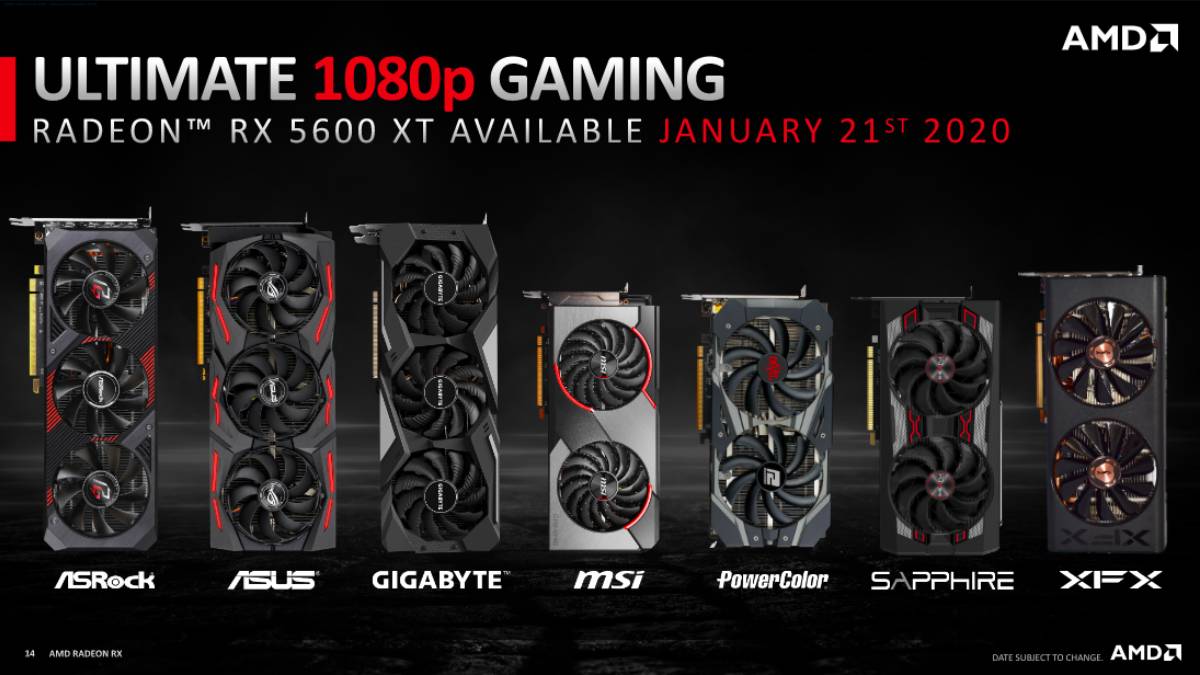 There will not be a stock cooler, and partner brands will all have their own designs

Graphics cards based on the new Radeon RX 5600 XT will be available in retail immediately. The series was first announced at AMD's press conference at CES 2020. There will not be any reference cooler design, but AMD says that Asus, MSI, Gigabyte, Sapphire, XFX, ASRock, and Powercolor will each have at least one model each available in many parts of the world. AMD's official price is Rs. 19,990 not including taxes ($279 in the US) but actual retail prices will be decided by each partner brand.

The Radeon RX 5600 XT GPU is based on the same RDNA architecture as its siblings and is manufactured on a 7nm process. It is a version of the same Navi 10 GPU as the Radeon RX 5700 and has the same 36 compute unit clusters with 2,304 stream processors, but lower clock speeds. The “game clock” is set at 1375MHz while the boost clock is 1560MHz.

AMD cites recent Steam hardware survey results, saying that over 65 percent of respondents game at 1080p, and the top three GPUs are all over three years old. The current most popular GPU at the moment is the GeForce GTX 1060 6GB, and AMD wants its new GPU to be seen as the ideal replacement.

In terms of performance, AMD claims up to a 55 percent uplift compared to the GeForce GTX 1060 across AAA and esports titles. With a selection of DirectX 11, DirectX 12 and Vulkan API-based games running at ultra settings, the Radeon RX 5600 XT is also said to outperform the more modern GeForce GTX 1660 Super and GeForce GTX 1660 Ti by up to 15 percent and 20 percent respectively.

Compared to AMD's own previous-generation Radeon RX 590, AMD boasts of a 2.1X performance-per-Watt improvement, with 42 percent better performance and 33 percent lower power consumption on average. Gamers can expect over 60fps at Ultra settings in AAA games and over 120fps in esports games. All these performance figures were measured by AMD without software enhancements such as Radeon Boost enabled.

AMD also says it is conscious that buyers in this segment hold on to their graphics cards for many years and expect enough performance headroom for upcoming titles as well as current ones.

The Radeon RX 5600M will first be seen in the upcoming Dell Gaming G5 Special Edition laptop, unveiled at CES 2020 earlier this month. This will be the first notebook with an AMD Radeon RX 5600M GPU as well as a Ryzen 4000 series CPU. The two will work together with AMD's SmartShift mechanism which manages thermal and power envelopes on a system-wide level, allowing the CPU and GPU to trade off performance when either one is in demand.