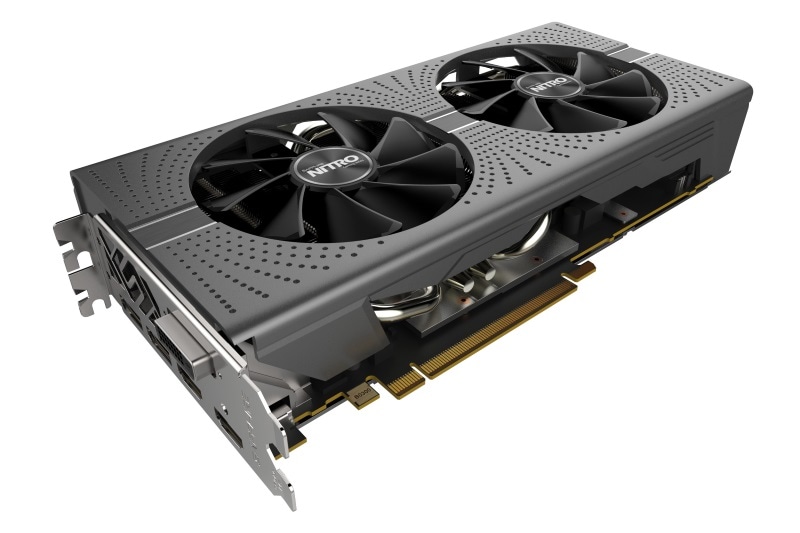 AMD has today launched a new generation of Radeon GPUs for graphics cards, called the Radeon RX 500 series. The new Radeon RX 580, RX 570, RX 560 and RX 550 are based on a revision of the Polaris architecture which powered last year's Radeon RX 400 series, not the all-new Vega architecture which is also expected to launch in the near future.

The new Radeon RX 500 series is aimed at gamers who want to upgrade from graphics cards that are at least two years old and do not support VR or the latest game development standards such as DirectX 12 and Vulkan. AMD promises that the new products' higher clock speeds, reduced latency and improved software will help gamers play current-day titles such as Battlefield 1, COD: Infinite Warfare and Resident Evil: Biohazard without compromising on resolution or image quality. Notably, AMD has not compared these cards to their immediate predecessors, because there are only relatively minor differences between the two Polaris generations.

Lower down the line, the Radeon RX 560 replaces the RX 460. It will target budget-conscious users who will play e-sports games at 1080p and who won't expect to run the latest AAA titles at full settings. Buyers will get a modest 16 compute units and base/boost speeds of 1175/1275MHz respectively. Cards will have 4GB of GDDR5 RAM on a narrower 128-bit bus. Performance is said to exceed that of a two-year-old Radeon R7 360 by up to 57 percent. Prices will start at $99 (approximately Rs. 6,400).

Finally, the Radeon RX 550 targets those who want to upgrade from integrated graphics. It will have 8 compute units and 2GB of GDDR5 RAM on a 128-bit bus. Clock speed is set at 1183MHz. Radeon RX 550 cards will not need a power supply, making them suitable for drop-in upgrades of much older PCs or those with weak power supplies. AMD says that buyers can expect a 4X performance boost compared to integrated graphics, and a 1.7X increase over the Radeon R7 250. Starting at $79 (approximately Rs. 5,100), AMD calls this "the doorway to PC gaming".

All four GPUs support HEVC H.265 4K video decoding. AMD also touts its Freesync technology which allows monitors and graphics cards to synchronise their refresh cycles to avoid frame tearing, and Radeon Chill, which can regulate power consumption depending on the intensity of different scenes in a game.

Graphics cards based on the Radeon RX 580 and 570 should be available immediately from board partners including Sapphire, Asus, PowerColor, Gigabyte and MSI. Radeon RX 550 cards are set to become available globally on April 20, while Radeon RX 560 cards will follow in early May. There is no official word on whether Radeon RX 400 series prices will be adjusted downwards or whether these models will disappear from the market.