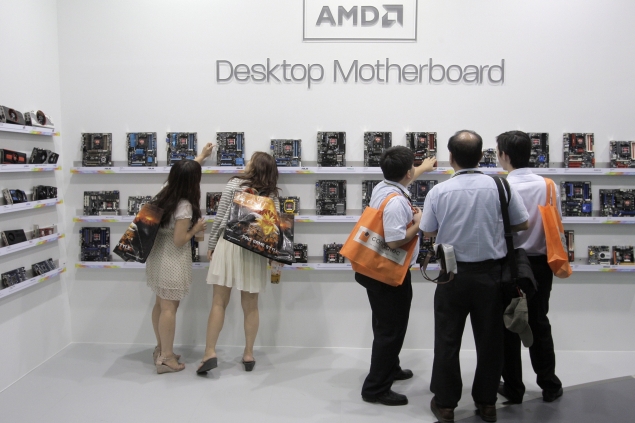 The NYSE-listed firm launched the 2013 AMD Elite Mobility APU, formerly codenamed Temash, which the company claims is the world's first 28nm, quad-core x86 system-on-a-chip (SoC) APU designed for touch, small form-factor notebooks, tablets and hybrids that are 13-inches and below.

The 2013 AMD Elite Mobility APU chips are available as AMD A-Series APUs, and come in dual (A4) and quad-core (A6) configurations, combining "Jaguar" x86 Central Processing Unit (CPU) cores with Graphics Core Next AMD Radeon HD 8000 Series graphics. AMD says these new APUs deliver up to 172 percent more CPU performance per watt and up to 212 percent better graphics performance per watt than its predecessor. It also delivers up to 12 hours of resting battery life, which is 45 percent longer. GPU performance is nearly five times more than the competition. Other features include full support for 1080p touch displays, and full Microsoft Windows compatibility, including support for Windows 8.1 Blue.

The launch also included new low-power versions of the 2013 AMD Elite Performance APU, codenamed Richland, which according to AMD offer the best graphics and compute in a performance APU for premium ultrathin notebooks.

According to AMD, these top-of-the-line AMD A-Series APUs with A8 and A10 models deliver up to 12 percent better productivity performance and between 20-40 percent better visual performance than the previous generation, including up to 51 percent more power efficiency in HD video playback and up to 13 hours of resting battery life. AMD estimates the new 2013 AMD Elite Performance APU chips offer between 39-72 percent better gaming performance on today's leading games than the competition.

The new APUs are designed to better mobile experiences for users, and to that end, AMD has also introduced AMD Elite Experiences Software (such as AMD Gesture Control, AMD Face Login, and AMD Screen Mirror), and hadware features like AMD Dock Port, where users can utilize up to four external monitors and sync to other devices through a single connection.

Elaborating on the qualities of Temash and Kabini, AMD Country Manager (Consumer & Retail) Chandrahas Panigrahi said: "A great advantage with these chips is that power requirement has gone down so battery life goes up and hence your thickness of the machine comes down, which means you have enabled the equipment to be more thinner and lighter."

The APUs are designed to balance needs of a wide range of new and traditional mobile PC users and are available from the world's top computer makers, which include products announced today by HP, Lenovo, Acer and Asus, he added.

Some of these products, powered by AMD chips, give about 11-12 hours of battery life depending on the conditions, making them a preferred choice for both professionals and gaming enthusiasts.

Commenting on the changing consumer demands and AMD's position, Panigrahi said the changing needs will manifest in various products like 10 or 11-inch tablets with touch and affordability.

There are form factors that are evolving as it drives the convergence of content creation and content consumption. In this dynamic landscape, AMD is positioned as a leader, when it comes to performance and the firm's growing market share in India speaks for itself.

According to research firm IDC, AMD accounts for about 14.5 per cent of the consumer market in India in the second quarter of this year as compared to less than one per cent in April-June quarter of 2010.

"By combining strength of superior graphic capabilities and broad range of computing abilities, AMD strives to strengthen its presence in the consumer segment through the launch of its 2013 Mobile APU platforms in India," he said.

On the future of computing devices, Panigrahi said that PCs still have a market in India. The PC penetration in the country is about 8 per cent, which still leaves a lot of ground to be covered.

Besides, consumer needs are changing and that is transforming into new form factors like tablets. These demands will manifest into various other products like 2-in-1s and hybrids.

On AMDs presence in the market, he said the firm has ramped up its retail ecosystem, which entails that a person selling consumer products (PCs, tablets) at the store will be aware of the advantages that AMD provides apart of other options that he has.

"Besides, we have also built strong relationships with original equipment manufacturers (OEMs), which helps in taking us to the consumers," he added.