AMD fans can pick up a special edition CPU or GPU with two free AAA games, and there are some commemorative goodies to be had as well. 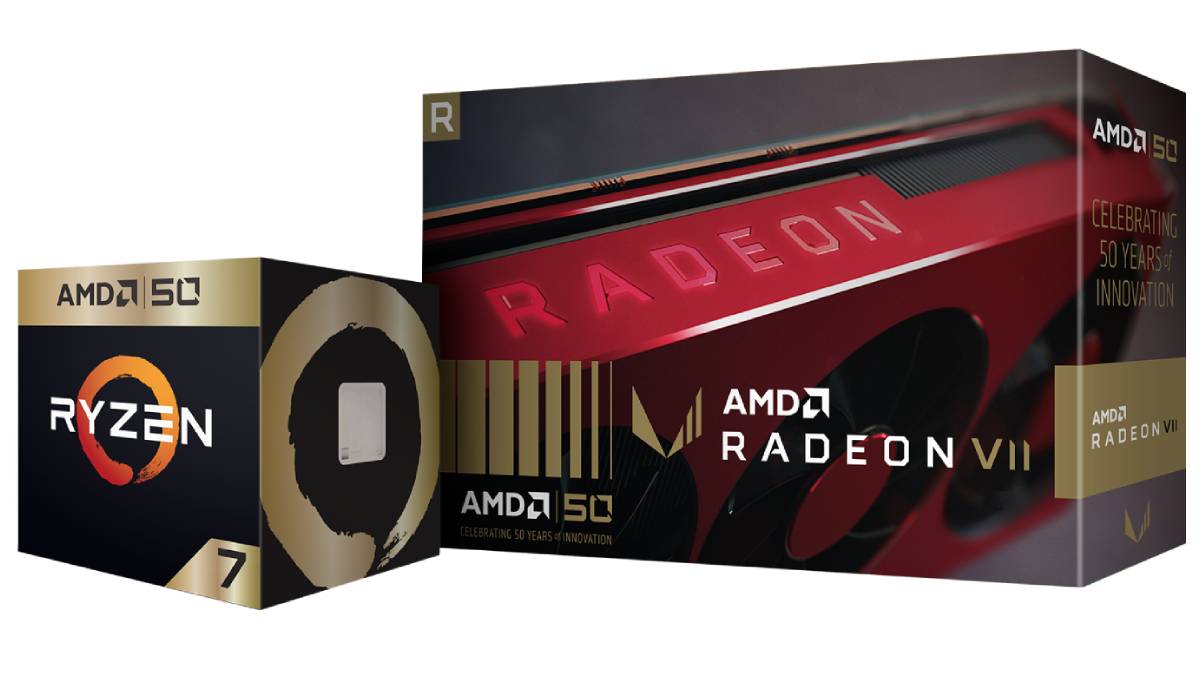 AMD celebrates its 50th anniversary on May 1, and to mark the occasion, the company is rolling out special edition versions of its current top-end CPU and GPU, as well as offering a new game bundle to customers who buy one of a selection of other products. The company also says that select online and offline retailers will be offering 50th anniversary deals on AMD products between April 29 and June 8. in the US, this includes a special one-day sale on May 1 at Best Buy . There will also be special edition products including graphics cards and motherboards from some of AMD's partner companies.

News of the special edition has leaked online a few times, and it was speculated that AMD would be binning its highest performing CPU dies in order to deliver extra overclockability, but there is no official mention of any such feature. The Ryzen 7 2700X Gold Edition will be sold in a black and gold box and will include the same RGB LED Wraith Prism cooler that the standard product comes with.

The second special edition product is the AMD Radeon VII Gold Edition, which is also not different in terms of features and specifications from the standard Radeon VII, but has a bright red cooler shroud and modified packaging with gold accents and the AMD50 logo.

The Ryzen 7 2700X Gold Edition is priced at $329 while the Radeon VII Gold Edition will cost $699 in the US, which are the same as the prices of their standard counterparts. Pricing and availability in India have not yet been disclosed. Putting a damper on these special editions, AMD is expected to announce its Ryzen 3000-series 7nm CPUs at Computex 2018 or shortly after, while the next-gen Navi GPU architecture is coming later this year.

Buyers of both products in some countries will get commemorative goodies in the form of an AMD 50 sticker with Su's signature and a coupon for a t-shirt. They will also be eligible for the new AMD50 game bundle, which is not exclusive to the two new products. At least one Indian retail website, MD Computers, is already publicising the AMD50 game bundle though the Gold Edition products aren't listed anywhere yet.

The AMD50 game bundle includes coupon codes for Tom Clancy's The Division 2 with a one-year season pass and additional in-game content, as well as World War Z. Anyone who buys the Ryzen 7 2700X Gold Edition and Radeon VII Gold Edition as well as the standard versions of these products will be eligible to claim the bundle. Other eligible products include the Ryzen 7 2700, Ryzen 5 2600X, Ryzen 5 2600, and Ryzen 5 2400G CPUs, as well as all Radeon RX Vega series, and Radeon RX 500-series graphics cards.

Finally, Gigabyte has shown off a commemorative Aorus X470 Gaming 7 Wifi motherboard which has the AMD50 logo and a default gold colour for its RGB LEDs, and Sapphire is launching a version of its Radeon RX590 Nitro+ with a gold shroud.

AMD was founded on May 1, 1969 in Santa Clara, California, by engineer Jerry Sanders after he left Fairchld Semiconductor. The company has since then grown to be the only competitor to Intel in the X86 CPU space and is for now the only competitor to Nvidia in the consumer GPU space. AMD will also be hosting an open house party at its office in Markham, Ontario, where fans and members of the public have been invited to see a demonstration of products and interact with staff.