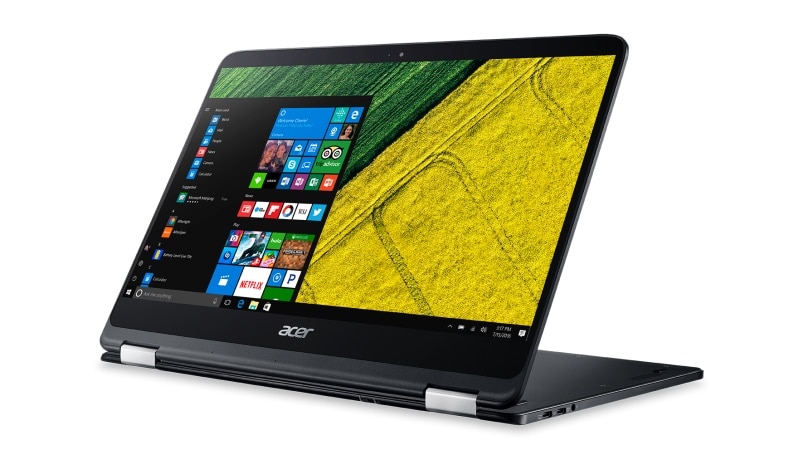 Acer had back at IFA 2016 launched new models in its Spin series of 2-in-1 laptops, alongside additions to the Swift and Predator series of devices. Acer on Wednesday has announced the launch of the Spin 7 laptop in India, priced at Rs. 1,09,000. It will be available across key retail stores in India, the company said.

The Windows 10 Home-based Acer Spin 7 is being touted as the world's thinnest convertible notebook, and bears an all-aluminium unibody that's 10.98mm thick. It weighs in at 1.2kg. The laptop's display can be rotated 360-degrees, converting the laptop into a tablet. The company at launch also touted that the laptop sports a 14-inch full-HD (1920x1080 pixels) IPS touchscreen display that fits in a chassis the size of a 13-inch laptop.

Other specifications of the Acer Spin 7 include a seventh-generation Intel Core i7-7Y75 processor, 8GB of LPDDR3 RAM, a 256GB SATA III SSD, and two USB Type-C (USB v3.1) ports. It features Wi-Fi 802.11ac connectivity, a memory card reader, and the company is promising a battery life up to 8 hours from the 4-cell 2770mAh battery on board. Also being touted is Dolby Audio Premium technology.

Speaking at the launch, Chandrahas Panigrahi, Sr. Director and Consumer Business Head, Acer India, said, "We are extremely excited to launch one of our flagship products in India, something that we are really proud of. Considering that Acer has always focused on delivering industry leading innovations, the Spin 7 is a reflection of just that. Our top-of-the-line Spin 7 will allow consumers to enjoy extreme portability without compromising on performance or versatility."