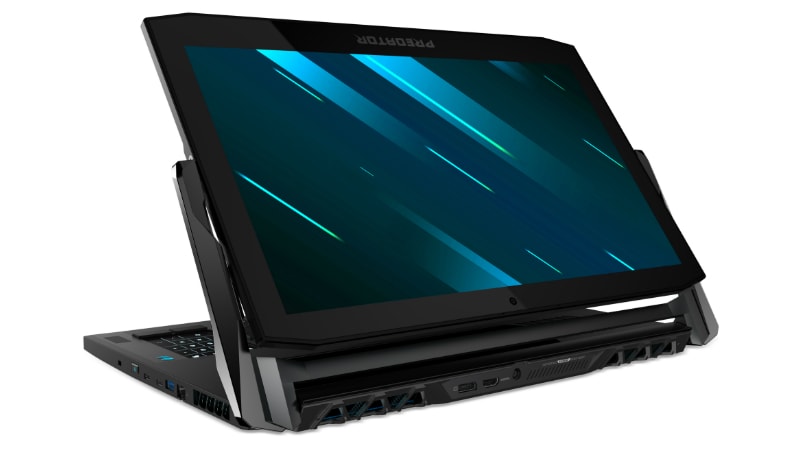 The Triton 900 has a CNC-machined hinge that that flips, extends, or reclines the 17-inch display

Acer Predator Triton 900 specifications and features
Thanks to the ‘Ezel Aero Hinge', the Predator Triton 900 can be used in four different modes. There's the basic notebook mode, a tablet mode, display mode - which flips the screen around so you can share content with friends and family, and an ‘Ezel' mode for playing games on the touchscreen. The trackpad is placed on the right side of the keyboard rather than below it as on conventional laptops. Acer claims this unique placement helps gamers easily use the keyboard and trackpad at the same time.

The 17-inch 4K IPS display supports Nvidia's G-Sync technology which synchronises a monitor's refresh rate to the update rate of the computer's GPU. The hardware on board includes Intel's 8th generation processors (up to a six-core Core i7), up to 32GB DDR4 RAM, NVMe PCIe RAID 0 SSDs, and the Nvidia GeForce RTX 2080 GPU. Acer will also be bundling an Xbox wireless receiver along with the laptop, which lets users play games on Windows 10 computers with an Xbox controller.

Acer Predator Triton 500 specifications and features
Also showcased at CES 2019, the Acer Predator Triton 500 weighs just 2.1kg, and has an all-metal chassis and bezels measuring in at 6.3mm. The laptop can be configured with up to 32GB DDR4 RAM, the 8th generation Intel Core i7 processor, and Nvidia GeForce RTX 2080 GPU. The battery life is rated at 8 hours and the 15-6-inch full-HD IPS display has a refresh rate of 144Hz and 300 nits of maximum brightness.

Acer will be launching a smartphone application called PredatorSense later on in the year, which will allow users to control their PC remotely. Through the app, users will be able to configure settings for overclocking, fan speeds, lighting, and audio modes.