The most expensive of the lot - Predator Triton 900 – is convertible gaming PC. 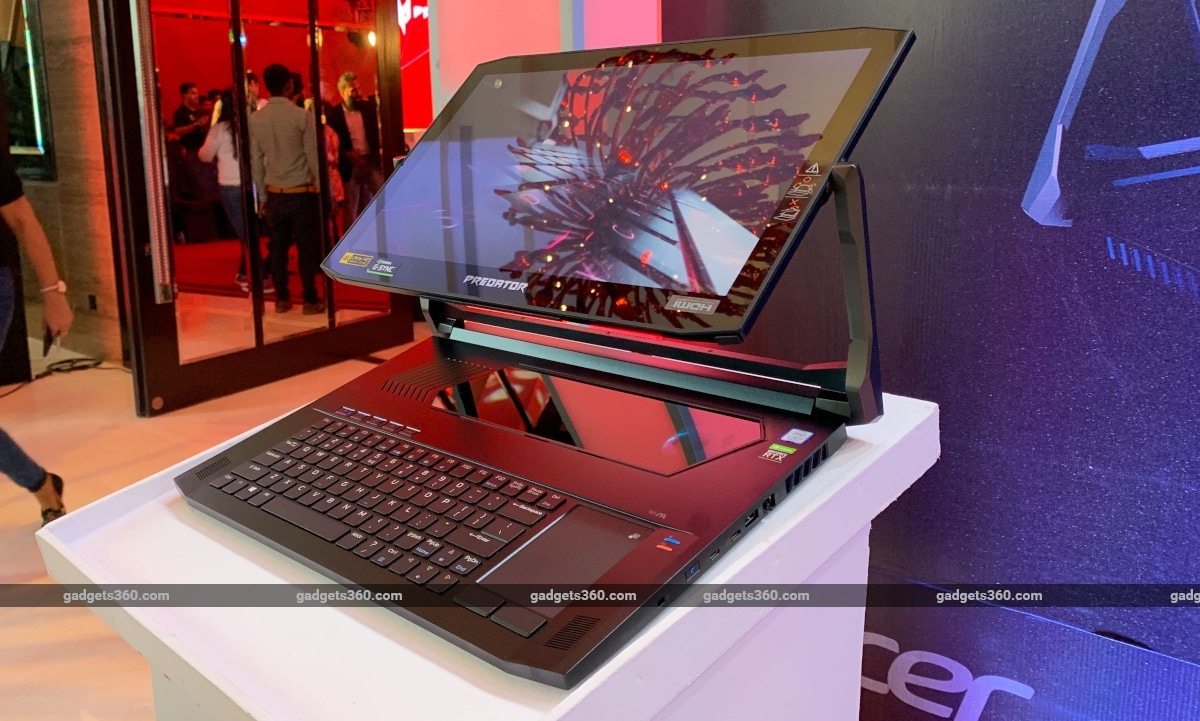 Expanding its gaming portfolio in a big way in India, Taiwanese computing giant Acer on Tuesday launched eight new gaming laptops, across several lineups. The new Acer gaming laptops are priced starting at Rs. 59,999, and will go up to Rs. 4,49,999. A number of these laptops were showcased by the company this April. The laptops are Acer Triton 900, Triton 500, Helios 700, Helios 300, Nitro 7, and Nitro 5. Both Helios 300 and Nitro 5 will be offered in two display sizes. The company also unveiled three gaming-focussed monitors as well as a streaming desktop PC in the country.

Unlike Triton 900, the Acer Predator Triton 500 comes with a more traditional design. It packs a 15.6-inch full-HD screen with 144Hz refresh rate in an all-metal chassis with 6.3mm bezels. The laptop is powered by up to 8th-generation Intel Core i7 processors and includes Nvidia GeForce RTX 2080 GPU, up to 32GB DDR4 RAM, and NVMe PCIe Raid 0 SSDs. The laptop will also come with Acer's advanced cooling and Waves Maxx audio technology.

Acer Predator Triton 500 will start at Rs. 1,65,999. The laptop will be sold via the company's e-store and Acer Malls across the country.

Acer Predator Helios 300 will be offered in 15-inch and 17-inch display sizes, both with full-HD resolution IPS screens. The laptop will feature up to 9th-generation Intel Core i7 CPU, up to a Nvidia GeForce RTX 2070 with Max-Q graphics card, up to 32GB of RAM, and up to two PCIe NVMe SSDs in RAID 0, plus a standard mechanical drive. The Helios 300 also sports a metal chassis with teal blue accents, a new keyboard with ‘Predator' fonts, and a narrow bezel around the display.

The Acer Predator Helios 700 features a 17-inch full-HD IPS display with a 144Hz refresh rate, 3ms response time and Nvidia's G-SYNC technology. The laptop comes with up to 9th-generation Intel Core i9 CPU and options of either Nvidia GeForce RTX 2080 or RTX 2070 GPU. You also get up to 64GB of DDR4 RAM, Killer DoubleShot Pro networking with Killer Wi-Fi 6 AX 1650 wireless chip and the Killer E3000 Ethernet port, a 5.1 speaker system and fourth generation AeroBlade 3D fans, and vapour chamber for cooling.

The highlight of the Acer gaming laptop is its HyperDrift keyboard, which slides outwards, thereby revealing two additional air intakes and a glass panel, which gives you a peek at the five heat-pipes inside. Once out, the palm-rest area aims to offer a much more comfortable position for gaming.

Acer Helios 700 will retail starting Rs. 2,49,999. It will go on sale starting mid-September in the country.

Acer Nitro 7 features a metal chassis and 15.6-inch display with 144Hz refresh rate and a 3ms response time. The laptop is powered by 9th-generation Intel Core CPUs and the latest Nvidia GPUs, up to two NVMe PCIe SSDs in RAID 0 with up to 2TB of mechanical storage, and up to 32GB of DDR4 RAM. The Acer Nitro 7 also comes with a dual exhaust system for keeping temperatures down when gaming. Additionally, you will get Killer Ethernet E2500 networking card and Waves MaxxAudio.

Acer Nitro 7 will start at Rs. 84,999. It will be sold via Acer e-store and Acer Malls across the country.

Like the Acer Predator Helios 300, Acer Nitro 5 will also be offered in two screen sizes - 17.3-inch size or a 15.6-inch. Both variants get full-HD IPS panel. Under the hood, you will get 9th generation Intel Core processors, latest Nvidia GPUs, up to two NVMe PCIe SSDs in RAID 0, up to 32GB of RAM and Wi-Fi 802.11ac with 2x2 MU-MIMO antennas. Additionally, there is the Killer Ethernet E2500 networking card and Waves MaxxAudio technology on board.

Acer Nitro 5 15-inch variant has been priced starting at Rs. 59,999. It is now available via Acer e-store and Acer Malls. There is no word on the price of the 17-inch version right now.

Acer also announced the Nitro Stream, which is a dedicated streaming PC with a built-in capture card for streaming PC and console games. Specifications include 8th-generation Intel Core i7 processor, up to 32GB of RAM, 256GB SSD, and an in-built capture card. The PC is also compact enough to be mounted at the back of a monitor using the VESA mount standard. The company has not announced the pricing; however, it will go on sale in mid-September.