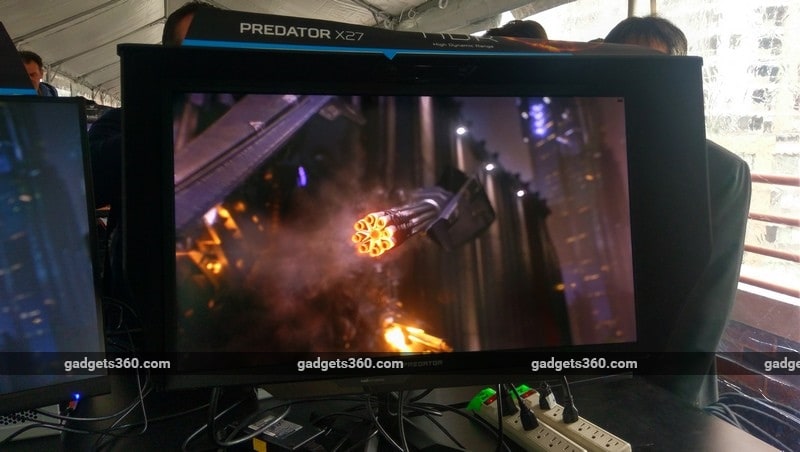 HDR display technology is not going to be restricted to televisions alone in 2017 as AMD and Nvidia have both unveiled their respective HDR technology for the PC. Around the time of CES, AMD unveiled its Radeon FreeSync2 technology and amongst various improvements it brings to the table, the biggest has got to be support for HDR. Nvidia wasn’t too far behind either with its G-Sync HDR announcement and on Thursday, at its Next@Acer event in New York, Acer has dropped a brand new Predator X27 monitor in support of this technology. The company also announced a 27-inch curved monitor called Z271UV which covers 125 percent of the sRGB colour space and has a 1800R curved panel. Pricing and availability details have not been announced yet.

Both monitors are treated with a Quantum Dot film, which allows them to achieve a wider, brighter and more accurate colour range and also support Tobii eye-tracking technology. The Predator X27 features a 4K resolution (2160x3840), a refresh rate of 144Hz, 4ms response time and a peak brightness of and impressive 1000nits. It also supports 99 percent of the sRGB colour space and 384 local dimming LED zones for better contrast and deeper black levels. The monitor also features a diamond cut metal stand with tilt, swivel, and height adjustments.

The Predator Z271UV features an 1800R curved panel which offers a much more visible curve compared to most curved panels (usually 3000R). Since we sit a lot closer to a PC monitor as compared to a TV, the more pronounced curve should help offer a wider field of view. The monitor also features an edge-to-edge design, which makes it useful for multi-monitor setups. It also boasts of a colour gamut of 125 percent of the sRGB spectrum. It also has a native 3ms response time and a refresh rate that can be pushed to 165Hz. There are two 7W speakers with Acer’s TrueHarmony technology for better audio.

Disclosure: Acer sponsored the correspondent's flights and hotel for the trip to New York for the event.