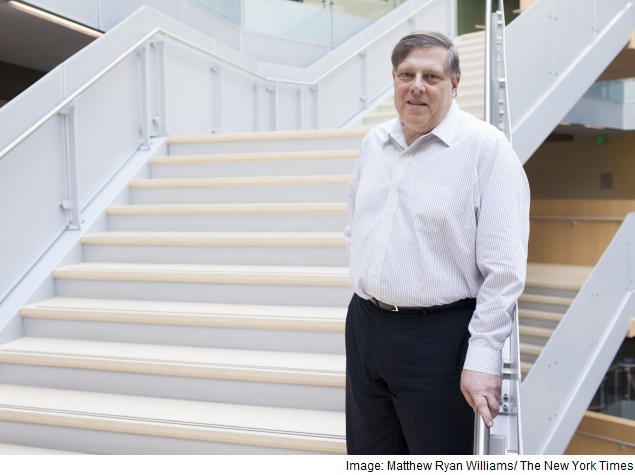 Four senior Microsoft executives, including Stephen Elop and Mark Penn, will leave the technology company in the biggest organizational shake-up yet under Satya Nadella, its chief executive.

In an email sent to Microsoft employees Wednesday morning, Nadella said that three of the departures were related to his decision to organize the company's engineering efforts into fewer groups. The three executives leaving as a result are Elop, former chief executive of Nokia, who has been leading Microsoft's devices group; Eric Rudder, leader of its advanced technology and education efforts; and Kirill Tatarinov, head of its business solutions group.

"To better align our capabilities and, ultimately, deliver better products and services our customers love at a more rapid pace, I have decided to organize our engineering effort into three groups that work together to deliver on our strategy and ambitions," Nadella said in the email.

The organizational changes are the most sweeping since Nadella was named chief executive of Microsoft in February 2014. While Microsoft has a long history of bureaucratic reshufflings, they do not typically involve the departure of so many executives at once.

The last major reorganization occurred two years ago under Steven A. Ballmer, Nadella's predecessor as chief executive, who got rid of many of the product divisions at the company and reordered them along broader categories like operating systems.

Nadella's decision to merge several groups into others effectively left a handful of Microsoft executives without clear roles. The group Elop had been leading will be folded into a Windows and devices group overseen by Terry Myerson. Tatarinov's group will become part of the cloud and enterprise team led by Scott Guthrie. Qi Lu, the head of Microsoft's applications and services group, will take over the education initiatives unit that was led by Rudder.

By far, the most significant of the changes is the merging of devices, which includes Xbox, Surface tablets, smartphones and other hardware products, with the Windows organization under Myerson. By grouping hardware and operating systems under one leader, the move undoes part of the reorganization by Ballmer.

The move also left little room for Elop, the only one of Microsoft's senior leaders with experience as chief executive of a large publicly traded company. Elop had worked at Microsoft for several years, then rejoined it after the company acquired the mobile division of Nokia, a controversial deal within Microsoft's executive ranks. He was also among the internal candidates who were considered as a successor to Ballmer.

Wes Miller, an analyst at Directions on Microsoft, a research firm, interpreted the changes as a signal that Microsoft was committed to working with outside hardware partners to create devices that use Microsoft software.

"Devices from Microsoft are just a category, not their own division within Microsoft," Miller said.

Nadella said that Penn, Microsoft's chief strategy officer, informed him several months ago that he planned to leave the company in September to form a private equity fund, among other pursuits. While Penn has worked for Microsoft for a number of years, he is best known as a former campaign strategist for Hillary and Bill Clinton.

Penn announced on Wednesday that his new firm, the Stagwell Group, would invest in advertising, research, data analytics, public relations and digital marketing services. The firm has raised $250 million (roughly Rs. 1,597 crores) in investment capital and can, by using debt, make up to $750 million (roughly Rs. 4,792 crores) in acquisitions. Ballmer is a major investor in the Stagwell Group.

"Ballmer is the greatest investor anyone in marketing could hope to have, given his incredible experience, contacts and knowledge," Penn said.

He said that there was a "huge opening now" for investments in the category as television advertising and other traditional forms of marketing are being shaken up by digital technologies. Penn also said he had already signed confidentiality agreements with six to eight companies that Stagwell Group is interested in doing deals with. Microsoft, he said, had allowed him to moonlight on investment work for the past few months.

At Microsoft, Penn oversaw a hard-edge advertising campaign that attacked Google on privacy and other practices. He said he was not currently involved in Clinton's presidential campaign, although he would not rule out returning to politics in the long term.

Penn said that his new firm was named after Thomas Stagwell, who owned land in Maryland in the 17th century, including on the Eastern Shore, where Penn's family vacations.

Have an Idea That's 'Made for India'? Intel and Government Will Pay You to Develop It
Uber Ruling Fuels Debate Over Workers