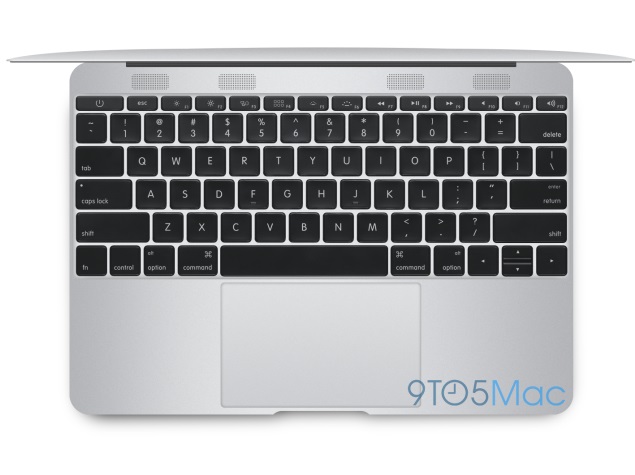 Apple's anticipated 12-inch Macbook Air has been rumoured for some time, and now first renditions made by 9to5Mac's artist Michael Steeber have surfaced along with some new details of the laptop. Additionally, a new report claims that development of Apple's first smartwatch, the Apple Watch, is on track and that the device will ship in the US by end of March.

9to5mac cites sources within Apple who provided details of the yet-to-be-announced MacBook Air, suggesting that the new laptop will be the company's "first major step in mobile Mac computing since the Retina MacBook Pro launch in 2012." Based on the details provided by sources, the upcoming 12-inch MacBook Air will sport a considerably smaller profile than the existing 13-inch MacBook Air, and will also be narrower that the 11-inch version.

The report states that in order to fit the 12-inch screen into the current 11-inch model's footprint, Apple has reduced the bezels around the screen on all sides. "Besides a new look for the front of the computer, the entire unibody has been revamped from the keyboard to the trackpad to the speakers," notes report.

It claims that the design of the rumoured 12-inch MacBook Air takes cues from 12-inch PowerBook previously launched by Steve Jobs. It adds, "new keyboard sits edge-to-edge across the width of the laptop."

Apart from the edge-to-edge design of the keyboard, the keys themselves have all been "redesigned and squeezed" to make the laptop narrower.

According to the same sources, Apple has repositioned some function keys across the top and has even "simplified the arrow key array in order to keep the keyboard as narrow as possible without taking away from overall usability." Reportedly, the trackpad has been also changed and is about the same width as the 11-inch one.

The rendition based on the details show the 12-inch MacBook Air sporting a thinner profile than the current 11-inch one. "Taking cues from the current Air, the future model has a teardrop-like, tapered design that gets thinner from top to bottom." The renditions also show four redesigned speaker grills that according to the report "double as ventilation holes for the fan-less device to keep cool". Thanks to its thin profile, the laptop is apparently being referred to internally as the "MacBook Stealth."

The report claims that the 12-inch MacBook Air comes with fewest ports ever: only a standard headset port and a lone USB Type-C port, in addition to the dual built-in microphones. "Apple is currently planning to ditch standard USB ports, the SD Card slot, and even its Thunderbolt and MagSafe charging standards on this new notebook," said the report.

In other news, 9to5mac citing several sources, claims that Apple is on track in the development of the Apple Watch and can be expected to start shipping in the US by end of March. The latest claims somewhat line up with what Apple's Senior Vice President of Retail and Online Stores, Angela Ahrendts, had revealed back in November; that the smartwatch will hit market shelves by spring.

The report however states that there could still be unexpected delays in software development and manufacturing. It says, "Apple is planning an extensive testing program to familiarize Apple Retail Store employees with the new product category. One or two representatives from many Apple Stores in the United States, depending on store and market size, will be sent to Apple offices in either Cupertino, California or Austin, Texas to learn first-hand about the Watch. These training programs will take place between February 9th and February 16th."

Apple has quietly been working on its first smartwatch, which is officially scheduled to launch early this year.