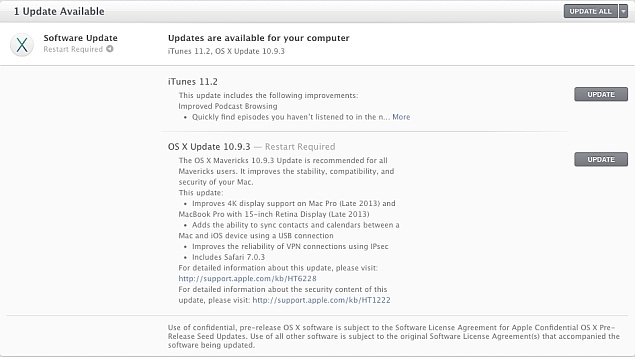 Apple has released 10.9.3 system update for OS X Mavericks. The update brings improved 4K display support on Mac Pro (Late 2013) and MacBook Pro with 15-inch Retina Display (Late 2013) as well as the ability to sync contacts and calendars between a Mac and iOS device using a USB connection.

The update also brings improved reliability while copying, editing and inspecting permissions of files on an SMB file server; increased stability when installing configuration profiles; and Safari 7.0.3, amongst other changes and improvements listed below.

The OS X Mavericks 10.9.3 Update is recommended for all Mavericks users. It improves the stability, compatibility, and security of your Mac.